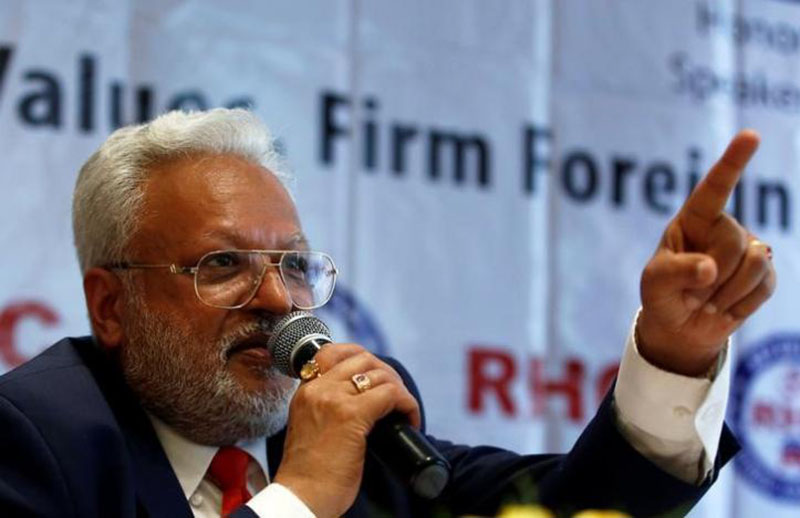 President of the Republican Hindu Coalition Shalabh Kumar gestures during a news conference in New Delhi, India, on October 7, 2016. Photo: Reuters
NEW DELHI: Donald Trump sympathises with India in its recent escalation of tensions with Pakistan and supports skilled immigration, an adviser said on Friday, portraying the US presidential hopeful as a friend of India and Indian Americans. Trump, a real estate billionaire, has earned a reputation of hostility towards minorities with proposals such as "extreme vetting" of potential immigrants and building a wall along the Mexican border to stop illegal immigration. The Republican nominee has proposed a ban on immigration from countries where vetting would be difficult, such as nations faced with Islamic militancy. Some Indian officials worry the United States could become more isolationist under Trump, leaving allies like New Delhi without the support it has enjoyed under President Barack Obama against China's growing regional influence. Shalabh Kumar, a Chicago-based businessman of Indian origin tasked by the Trump campaign with reaching out to Asian-Americans, said India and the Indian-American community had nothing to fear from a Trump presidency. There may be only 4 million Indian Americans but the potential to develop the relationship with their country of origin, a land of 1.3 billion, was huge, Kumar told a news conference at a hotel in New Delhi that drew a curious audience of about 30 journalists and several TV cameras. "Our overarching goal is for the 21st century to be an Indian-American century - instead of a Sino-American century," said Kumar, wearing a dark suit and gold-rimmed pilot glasses, his white hair swept back. "Mr Trump is a businessman - he has no bone in his body, not a drop of blood that is anti-immigrant," Kumar said. "He wants to have legal, skills-based immigration." The Punjabi-born businessman, who emigrated in 1969 and was converted to the Republican cause by Ronald Reagan, also said Trump's determination to keep Islamic militants out of the United States played well with his community. Around four in five Indians profess the Hindu faith, while 14 percent are Muslims. Hindu nationalist groups, including many Indian Americans, have applauded Trump's anti-Muslim comments. "There is a war declared on the free world by Islamic terrorists," Kumar said. "We are very happy that India under Prime Minister Narendra Modi has taken a very firm stand." Kumar said the Republican Hindu Coalition, a group that he set up last year, would hold a cultural event and charity fundraiser in New Jersey on Oct. 15 at which Trump will deliver a keynote address. Half of the gate receipts would go to victims of terrorism, in particular Hindu refugees from Kashmir and Bangladesh.
#President Barack Obama #Islamic militancy #Donald Trump's fan #Trump's Indian-American fan #President of the Republican Hindu Coalition Shalabh Kumar
You May Also like: