East Timor votes for president in test for young nation 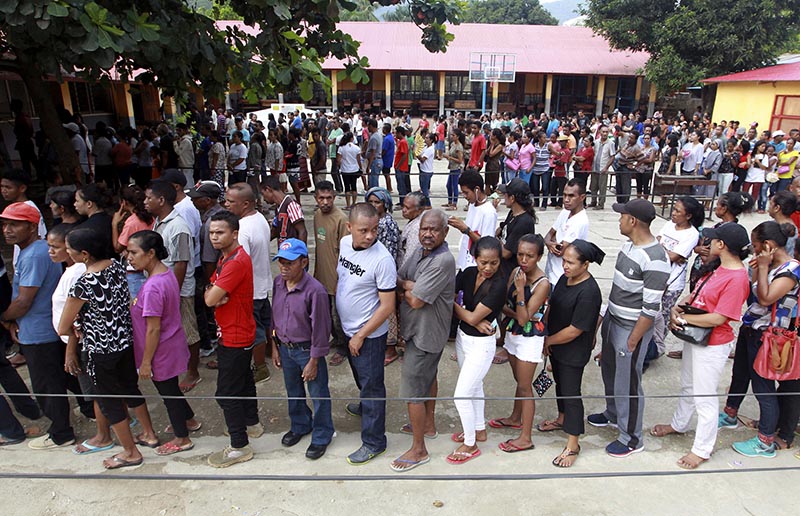 People queue up to give their vote during the presidential election at a polling station in Dili, East Timor, Monday, on March 20, 2017. Photo: AP
DILI: East Timor voted for a new president Monday in an election that will test Asia's newest and poorest nation. Francisco "Lu Olo" Guteres, a former guerrilla leader from the leftist Fretilin party, was up against seven other candidates. He and the Democratic Party's Antonio de Conceicao, the minister of education and social affairs, were the front-runners. While East Timor's president has a mostly ceremonial role, the prime minister heads the government. Guteres, 62, lost to current President Taur Matan Ruak in the 2012 presidential election. But in Monday's election, he had strong support from former Prime Minister Xanana Gusmao, a resistance leader who remains influential in politics. Ruak was not up for re-election and is expected to make a run for prime minister in July's parliamentary elections. East Timor voted overwhelmingly in 1999 to end 24 years of brutal Indonesian occupation that left more than 170,000 people dead. Its transition to democracy has been rocky, with its leaders battling massive poverty, unemployment and corruption as the nation continues to recover from the bloody break for independence more than a decade ago. More than 740,000 of the country's 1.1 million people were expected to vote Monday. While an early quick count will give a reliable indication of the election outcome within hours of the polls closing at 3 p.m., official results are not expected until Wednesday.
#president #Democratic Party #East Timor Election #Francisco "Lu Olo" Guteres #Antonio de Conceicao #Fretilin party #Taur Matan Ruak #Asia's newest and poorest nation
You May Also like: