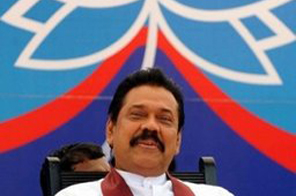 Sri Lankan President Mahinda Rajapaksa during a rally in Jaffna on April 1. Rajapakse, accused by critics of stifling dissent and persecuting the opposition, looks set to consolidate his hold on power in parliamentary elections this week. Source: AFP

COLOMBO: Sri Lankan President Mahinda Rajapakse, accused by critics of stifling dissent and persecuting the opposition, looks set to consolidate his hold on power in parliamentary elections this week.
Rajapakse called Thursday's vote two months ahead of schedule after his thumping re-election in January and his Freedom Alliance party is in line for an easy majority in the 225-member national legislature, according to analysts.
The opposition, which united behind a common candidate, former army chief Sarath Fonseka, for the presidential poll, has now split, giving Rajapakse's party a clearer run in the election.
"The government has no issue winning the election, but their challenge is to increase the majority," said political commentator Victor Ivan, referring to the 126 seats currently held by the ruling party.
Fonseka is now under detention and faces another hearing in an ongoing court martial process on Tuesday that could see him jailed for years for allegedly engaging in politics while in uniform and making illegal army procurements.
The opposition alliance have called on Fonseka to be released after he was arrested by the military 12 days after losing to Rajapakse, but each party is fielding separate candidates who will compete against each other.
Fonseka is running in the election from jail as head of the Democratic National Alliance, but his detention has not been the lightning rod for dissent that some hoped for and protests appear to be fizzling out.
"General Fonseka emerged as a symbol of opposition to Rajapakse, but he is not strictly a politician," said Nimalka Fernando, of the Democratic People's Movement, a political pressure group.
"If he does badly at this election, he will have a career in politics fighting the president, but it won't be an influential one," Fernando said.
Rajapakse and Fonseka were close allies in the defeat of Sri Lanka's Tamil Tiger separatists last year which ended their 37-year violent struggle for a homeland for ethnic Tamils in the north and east of the island nation.
At the January presidential poll, Rajapakse won the votes of most of the Sinhalese ethnic group, to which he belongs, but lost out in all Tamil areas to Fonseka.
Observers say the new government must address Tamils' desire for greater autonomy which fuelled the Tigers' separatist struggle.
The armed uprising was snuffed out in May after the loss of up to 100,000 people over more than three decades.
"There will have to be a broad agenda for national reconciliation," said political commentator Ivan. "The president, the opposition and the minority parties must show unity of purpose."
"If they fail, the country will face chaos. The end of the war with the Tigers has given political parties a chance to start on a clean slate."
Rajapakse and his family members, who hold key positions in government, stand accused by critics at home and rights groups abroad of clamping down on media freedoms and dissidents.
The Hong Kong-based Asian Human Rights Commission has accused Sri Lanka's government of engaging in "alarming attempts to repress the avenues of the political participation of the opposition and the entire population."
Voter enthusiasm appears to be low given that many expect a resounding ruling-party victory and there has also been scant debate.
"The main issues facing the country have not been ventilated during the campaign," said Paikiasothy Saravanamuttu, head of the Centre for Policy Alternatives think-tank.
He said the composition of minority Tamil parties in the next parliament could decide the level of agitation for autonomy.
The Tamil National Alliance, which was a puppet of the Tamil Tigers before they were annihilated last year, has warned it could resort to a civil disobedience campaign to press for greater political power.

#Election set to strengthen Sri Lanka president
You May Also like: