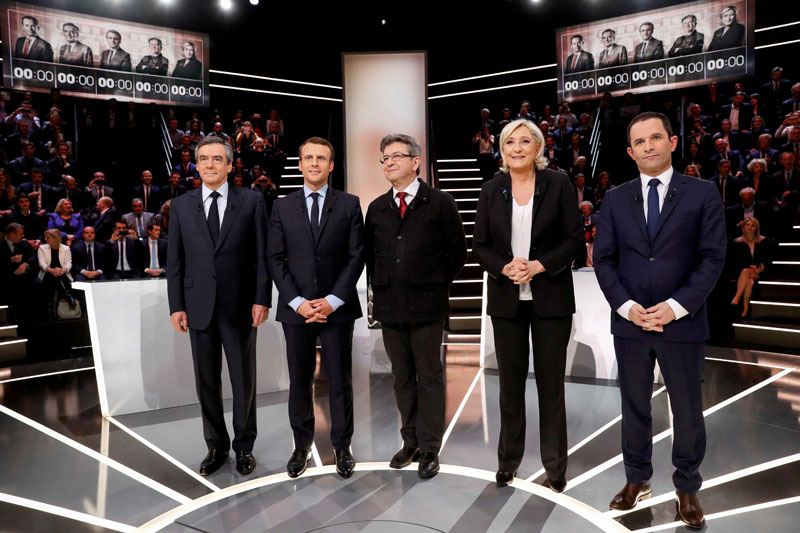 French presidential election candidates (left to right) Francois Fillon, Emmanuel Macron, Jean-Luc Melenchon, Marine Le Pen and Benoit Hamon, pose before a debate organised by French private TV channel TF1 in Aubervilliers, outside Paris, France, on March 20, 2017. Photo: Reuters
PARIS:  Centrist Emmanuel Macron solidified his status as frontrunner in France's presidential election on Monday in a televised debate during which he clashed on immigration and Europe with his main rival, far-right leader Marine Le Pen. A snap opinion poll showed Macron, a former economy minister who has never run for public office before, was seen as the most convincing among the top five contenders in a marathon debate of nearly three and a half hours that delivered no knock-outs. The debate, and the two others that will follow ahead of the April 23 first round, are seen as key in an election in which nearly 40 percent of voters say they are not sure who to back. "You are failing (voters) by twisting the truth," Macron told Le Pen when she talked about a rise of radical Islam in France and said he was in favor of the burkini, a full-body swimsuit worn by some Muslim women that stirred much controversy in France last summer. Later in the debate, National Front leader Le Pen mocked Macron, saying, of his comments: "It's completely empty. I want to attract the French people's attention to the fact that every time you talk, you say a bit of this, a bit of that, and never decide." Opinion polls have for weeks shown Le Pen and Macron, an independent centrist who used to be Socialist President Francois Hollande's economy minister, pulling away from the pack in an election full of twists and turns which is taking place against a backdrop of high unemployment and sluggish growth. Twenty-nine percent of viewers thought Macron was the most convincing, ahead of firebrand leftist Jean-Luc Melenchon with 20 percent, while Le Pen and conservative Francois Fillon were tied in third place, a snap survey conducted online by Elabe pollsters towards the end of the debate showed. Socialist candidate Benoit Hamon came in last. After the surprise of Britain's Brexit vote and the election of Donald Trump in the United States, markets are nervous about the possibility of a Le Pen victory. She is pledging to take France out of the euro and hold a referendum on EU membership. Only the top two candidates go through to the runoff, where polls show Macron easily beating Le Pen. But with so many voters undecided and polls showing the abstention rate could be higher than ever in France, the level of uncertainty remains high. A high abstention rate could benefit Le Pen as polls consistently show that her supporters are the most certain of their vote. SCANDALS Fillon, a one-time front-runner who has fallen back over by a scandal surrounding the employment of his wife as a parliamentary assistant, has been put under formal investigation, a first for a French presidential candidate. But the scandal, which has dominated the campaign for weeks, occupied relatively little time in the debate. Fillon, a former prime minister, himself alluded to the scandal, saying: "I may have committed some errors, I have faults, who doesn't, but I am experienced." Macron, a former investment banker, came under criticism for private donations made to his campaign when Hamon suggested he could fall under the influence of lobbies in the pharmaceutical, banking or oil industry. Macron retorted that he was the only candidate who was not funded by public money, since his party is new and had not yet benefited from public subsidies. "I pledge to be controlled by no one," he said. "The traditional parties, those that have for decades failed to solve yesterday's problems, won't be able to do it tomorrow either," said Macron, who made a name for himself by criticizing sacred cows of the French "social model" such as the 35-hour workweek. Le Pen repeatedly stressed her opposition to the European Union, saying she did not want to see France become a "vague region" of the bloc. "I don't want to be the vice chancellor of Angela Merkel," she said, referring to the German leader. The TV debate was the top trending topic on Twitter in France on Monday before it even started. Television debates were key to Fillon's victory in the center-right primaries in November and to Benoit Hamon in the Socialist primaries in January.
#France #Marine Le Pen #Emmanuel Macron #French presidential election
You May Also like: