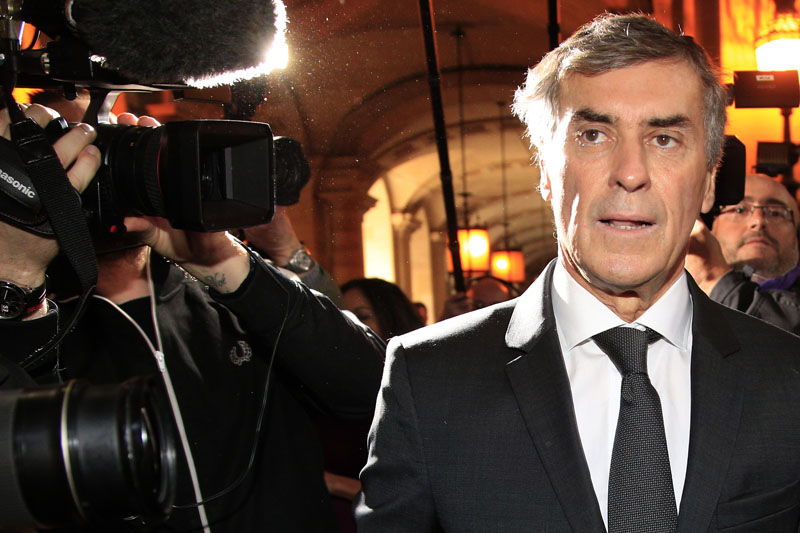 Former French budget minister Jerome Cahuzac arrives for his trial in Paris, on Monday, February 8, 2016. Photo: AP
PARIS: A former French budget minister will appear in court on charges of tax fraud and money laundering that forced him to dramatically resign three years ago in the first political scandal under President Francois Hollande. The trial of Jerome Cahuzac, once a champion in the fight against tax evasion, starts Monday afternoon in the main hearing room of the Paris criminal court in the presence of dozens of journalists and a large audience. The 63-year-old is accused of financing a lavish lifestyle by fraudulently concealing 687,000 euros ($765,000) of income from French tax authorities in 2009-2012 and laundering money in 2003-2013 through foreign bank accounts based in tax havens, including Switzerland, Panama, the Seychelles and Singapore. The Socialist, once considered a rising star in French politics, faces up to seven years in prison and at least a 1 million-euro fine if he is convicted of tax fraud. The trial's opening day attracted demonstrators who arrived at the courthouse carrying nearly 200 chairs they say they took from banks they accuse of participating in tax evasion. Cahuzac's lawyers have said they would use the first hearing on Monday to ask the court to postpone the trial, arguing a defendant shouldn't be under both a criminal and a tax procedure in the same time. If the court accepts Cahuzac's legal argument, the trial could be postponed for months. After strongly denying any fraud for months and publicly lying to the Parliament, on television, to the French people and to his government colleagues, he eventually admitted his wrongdoing in a statement in April 2013, saying he had been "trapped in a lying spiral" and that he was "devastated by remorse."

Former French budget minister Jerome Cahuzac arrives for his trial in Paris, on Monday, February 8, 2016. Photo: AP
On trial alongside Cahuzac are his former wife; a banker; a legal adviser; and bank Reyl, a respectable but little known Swiss establishment, accused of tax fraud and/or money laundering. For his transactions with bank Reyl, Cahuzac used a codename, Birdie, in a nod to his passion for golf. Ex-wife Patricia Menard, a 60-year-old dermatologist, is accused of hiding 2.5 million euros ($2.8 million) from the French tax authorities until 2013 and laundering money in the British tax haven of the Isle of Man and in Switzerland, allowing her to buy two London apartments estimated at around 3 million euros overall. Menard already paid 2.17 million euros in back taxes to the French tax authorities last year. Menard and Cahuzac divorced last November. Before being appointed budget minister in the first Hollande government in May 2012, Cahuzac was the leading tax specialist for the Socialist Party. When press reports first revealed the scandal in December 2012, Cahuzac was sponsoring a bill to reinforce the fight against tax evasion and fraud. Considered an ambitious, self-assured and talented politician, he was forced to quit in March 2013 after only 10 months in the first government of the Hollande presidency and eventually to end his political career after being fired from the Socialist Party the following month. Described sometimes as a seducer and known for his love of luxury watches, cigars and expensive vacations, Cahuzac built his wealth on his professional activities as a plastic surgeon in the hair transplantation clinic he operated with his ex-wife and as a consultant for big pharmaceutical laboratories. The Cahuzac scandal damaged Hollande's approval rating, which took a 13-point dive in the first quarter of 2013. It also had the effect of increasing the public's demand for probity and transparency by politicians.
#money-laundering #tax fraud #France #President Francois Hollande #Ex-Minister fraud #former French budget minister #Jerome Cahuzac
You May Also like: