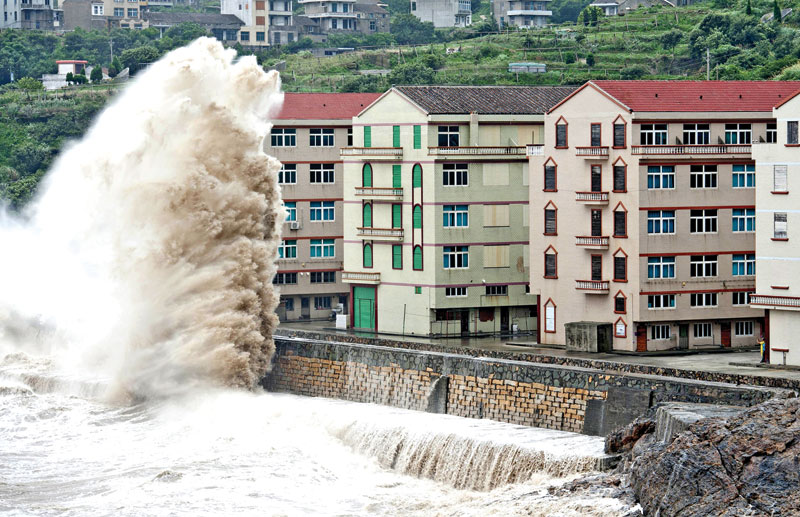 A wave, under the influence of Typhoon Chan-hom, hitting the shore next to residential buildings in Wenling, Zhejiang province, China, on Saturday. Photo: AP

BEIJING: China's eastern coast took less of a battering than feared after Super Typhoon Chan-hom changed course and lost much of its strength shortly after making landfall near Shanghai late on Saturday.

Chan-hom, which Chinese government meteorologists feared would be the powerful typhoon to hit China in decades, packed winds of 162 kph (101 mph) as it landed on the coast of Zhejiang Province but soon veered back to sea and toward the Korean peninsula.

Meteorological agencies in China, South Korea and Japan downgraded Chan-hom to a tropical storm on Sunday, warning it would continue to lash surrounding coastal areas with heavy rainfall and gales as it moved across the Yellow Sea.

No casualties had been reported by midday Sunday, according to the official Xinhua news agency.

While the storm's detour spared eastern China from a bigger disaster, heavy rains in recent days have forced the evacuation of 1.1 million people and flooded cities in Zhejiang, Jiangsu and Anhui provinces.

Economic activity on China's wealthy eastern seaboard was heavily disrupted as authorities cancelled trains and flights out of two Shanghai airports and ordered tens of thousands of ships back to port.

#China #Typhoon Chan-hom #China typhoon
You May Also like: