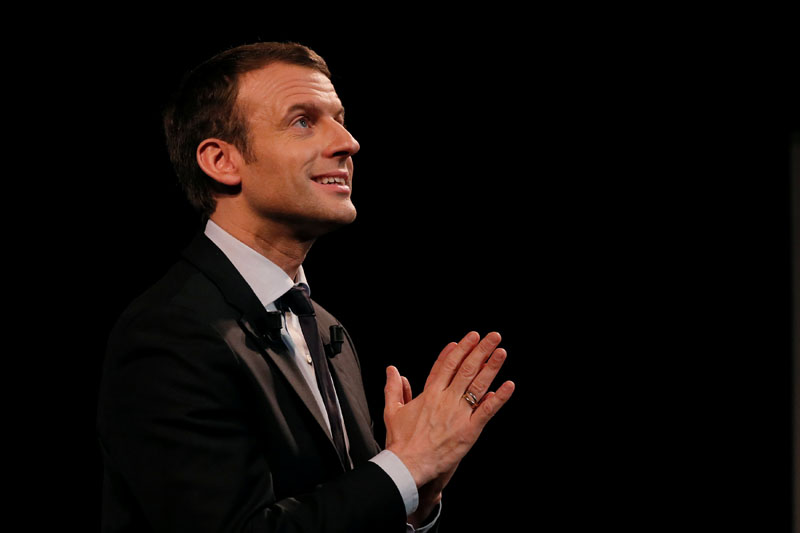 Emmanuel Macron, head of the political movement 'En Marche!', or 'Onwards!', and candidate for the 2017 presidential election, delivers a speech as he attends a meeting for Women's day in Paris, France, on March 8,2017. Photo: Reuters

PARIS:  Centrist Emmanuel Macron would come out ahead of far right leader Marine Le Pen in the first round of France's presidential election before going on to win a runoff vote against her, a Harris Interactive poll showed on Thursday.

Macron would win 26 percent of the vote in the April 23 first round followed by Le Pen with 25 percent, the poll showed, the second so far to give the popular former economy minister a first round lead.

While Le Pen's score was unchanged from the last time the poll was conduced two weeks ago, Macron's surged six percentage points after he unveiled his campaign manifesto and veteran centrist Francois Bayrou gave him his support.

Conservative Francois Fillon's struggle to overcome allegations that members of his family were paid public money for work they did not really do has also benefited Macron.

The poll showed Fillon, a former prime minister who had sought to project a wholesome image before the scandal broke in January, would be eliminated from the race with only 20 percent of the first round vote, down one point from two weeks earlier.

In the May 7 runoff vote, Macron was seen winning the presidency by 65 percent to 35 for Le Pen, with him gaining five percentage points from two weeks ago and her losing five.

The poll, which was conducted March 6-8 among 4,932 people for France Televisions, offered the latest boost to Macron after former Paris mayor Bertrand Delanoe, a Socialist heavyweight, said on Wednesday he would support him.