At a Glance: The legal dispute over release of Trump's taxes 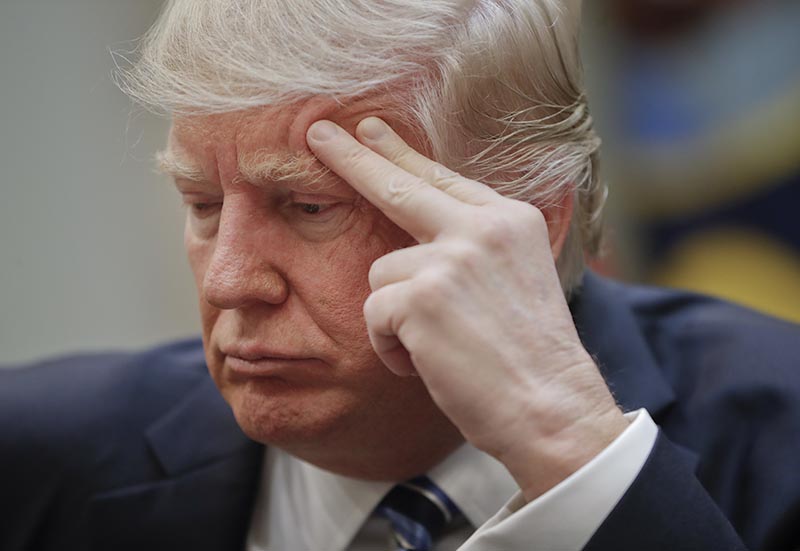 President Donald Trump listens during a meeting on healthcare in the Roosevelt Room of the White House in Washington, on Monday, March 13, 2017. Photo: AP
NEW YORK : The release of two pages of President Donald Trump's 2005 tax returns has sparked a legal dispute, with the White House and a major television network squaring off over whether a law was broken. The White House said MSNBC's publication of the pages Tuesday night violated a federal law that prohibits the unauthorised release of tax returns. But the cable network, which revealed the 1040 form on Rachel Maddow's show, claimed First Amendment privilege. Trump refused to release his returns during the campaign, breaking a decades-long tradition. The document revealed Tuesday showed Trump made more than $150 million in income in 2005 and paid $38 million in income taxes that year. Here's a look at the law — and the emerging controversy: Federal Law Federal law makes it illegal to publish an unauthorized tax return or "return information." According to federal statute, any violation of the law "shall be a felony punishable by a fine in any amount not exceeding $5,000, or imprisonment of not more than 5 years, or both, together with the costs of prosecution." That term "return information" not only applies to the amount of taxes paid, but also the amount of income, payments, receipts, deductions and other financial information that could be found on the forms. But legal experts have said the way the returns were obtained matters. If a media organization did not conspire to steal the material or get it from the government but simply received it from a private citizen, criminal liability would be less clear. Maddow said Tuesday that the return was mailed anonymously to Pulitzer Prize-winning journalist David Cay Johnston, who said he received the document unsolicited, in the mail. Johnston then speculated on the show that the documents could have been mailed from Trump, a known leaker of information, or his associates since they appeared to paint the president in a favorable light. A stamp reading "Client Copy" is visible on one of the two pages sent to Johnston. The White House Take A White House official released a statement in the minutes before Maddow's show aired, declaring "you know you are desperate for ratings when you are willing to violate the law to push a story about two pages of tax returns from over a decade ago." The statement goes on to declare that the returns were "illegally published" and then claims that it is "totally illegal to steal and publish tax returns." Trump, who is famously litigious, threatened lawsuits as recently as last October against women who came forward to accuse him of sexual harassment or misconduct, though he never followed through. It was not immediately clear if he would order a probe into the release of the 2005 returns. MSNBC'S Defence Maddow, during her broadcast, declared the First Amendment allows journalists to publish tax returns. A similar defence was mounted by The Washington Post amid the 1971 publication of the Pentagon Papers, a classified study of the United States' involvement in the Vietnam War. The Post argued that the publication of the sensitive documents served an important public interest. Editors at The New York Times made a nearly identical argument in October when one of their reporters was mailed Trump's 1995 returns. Dean Baquet, the paper's editor, had said he would risk jail to publish the returns. After the publication, the paper printed a statement that read, "Nothing could be more central to the First Amendment than our right to publish, and the public's right to know, important information about presidential candidates." Those 1995 returns showed that Trump took a $916 million loss that year — so big he could have avoided paying federal income tax for years to come.
#White House #Donald Trump #taxes #Legal Glance #MSNBC's publication #Trump's taxes
You May Also like: