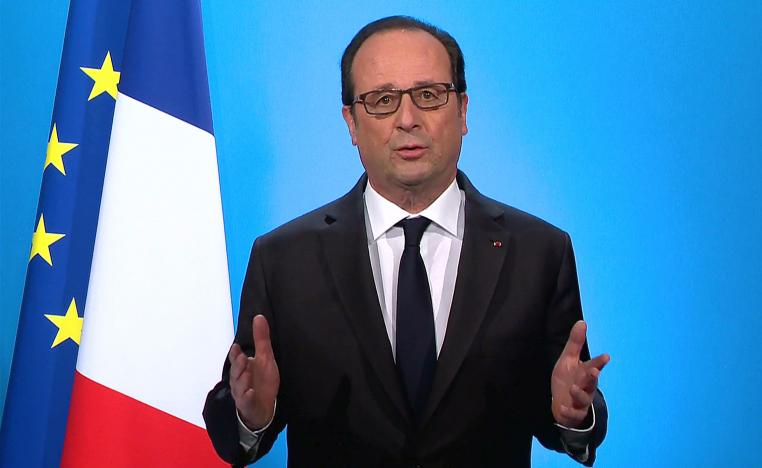 French President Francois Hollande, seen in this picture taken from French TV, makes a televised address from the Elysee Palace in Paris, France, on December 1, 2016. Photo: France Television via Reuters
PARIS: President Francois Hollande shocked France on Thursday by announcing he would not seek a second term next year, acknowledging his deep unpopularity and making way for another leftist candidate to take on conservative Francois Fillon and far-right leader Marine Le Pen. The surprise announcement - effectively an admission that by running again he would hurt his Socialist party's chances - marks the first time since France's fifth Republic was created in 1958 that an incumbent president has not sought a second mandate. "I am aware today of the risk that going down a route that would not gather sufficient support would entail, so I have decided not to be a candidate in the presidential election," a sombre-looking Hollande said in a televised address. Dogged by high unemployment, Hollande is the least popular president in French polling history, yet his closest aides had consistently said he would run. After Britain's shock vote to quit the EU and the U.S. choice of Donald Trump as president, the election next April and May is on course to turn into another test of voters' anger with traditional elites, with Le Pen tapping into frustration with immigrants, austerity and the European Union. The past two weeks have turned French politics on its head. First former president Nicolas Sarkozy was knocked out of the conservatives' primary, and then runaway favorite Alain Juppe was beaten to the party's nomination by Fillon, a reformist in the mold of Britain's Margaret Thatcher. Hollande's retreat makes it likely that his prime minister, Manuel Valls, will throw his hat in the ring to take part in the Socialist primaries in January. "In doing this, I'm facing my responsibilities," said Hollande. Black-suited and stony-faced, he called for all people with a "progressive" political viewpoint to unite. He also warned about the rise of populism and the far right. "I do not want France to be exposed to risks which would cost it dear, and even threaten its unity, its cohesion, its social balance," he said. Earlier in the day, Hollande had gone about business as usual, including congratulating Olympic medalists with a warm smile at a ceremony in the morning. He called just a few people, including Valls, in the afternoon, to tell them he would not stand for re-election, someone close to Hollande said. DIVIDED LEFT There has been tension in the past week between the president and the prime minister, who raised the possibility in a weekend interview that he might be a candidate in the election. All Valls said on Thursday night was that Hollande had made "the choice of a statesman". The Left is deeply divided as it approaches the election. Several other Socialists, including former economy minister Arnaud Montebourg, have said they will take part in the party's primaries in January. Those primaries will now likely pit Valls' centrist, more liberal line against the more left-wing views of the other candidates in the primaries, analysts said. "This opens up all possible scenarios and will free up tensions and rivalries within the Left, which, a few months before the presidentials, is the scenario of maximum danger for the Left," said Viavoice pollster Francois Miquet-Marty. Another of Hollande's ex-ministers, Emmanuel Macron, and leftist firebrand Jean-Luc Melenchon have said they will run in the presidential election, but without taking part in the primaries. Conservative Fillon said Hollande's mandate had ended "in political shambles and decay". UNPOPULAR LEADER Hollande beat conservative incumbent Nicolas Sarkozy in an election in May 2012 after a classic leftwing campaign in which he targeted big business and pledged to raise taxes for high earners. But his popularity soon began to decline with a perceived lack of leadership and flip-flops on key issues, particularly tax reform, which dismayed many on the left. His popularity has also been undermined by stubbornly high unemployment and anemic economic growth. Grassroots supporters were further alienated by a pro-business switch in 2014, a wavering over security reforms, and by labor laws that brought thousands out onto the streets in protests early this year. Hollande's image was also hit by a series of communication missteps, including a very public split with his ex-partner Valerie Trierweiler and pictures of him going to visit his new partner on a scooter. The last straw for some of his closest supporters was the publication of a book by two Le Monde journalists in October. In interviews with them, Hollande criticized several of his allies and others from judges to footballers, in comments that were widely criticized as indiscreet and ill-befitting a president. He also disclosed that French secret services had carried out four targeted killings on his orders.
#Francois Hollande #Marine Le Pen #Francois Fillon #French presidential election 2016 #Upcoming French President
You May Also like: