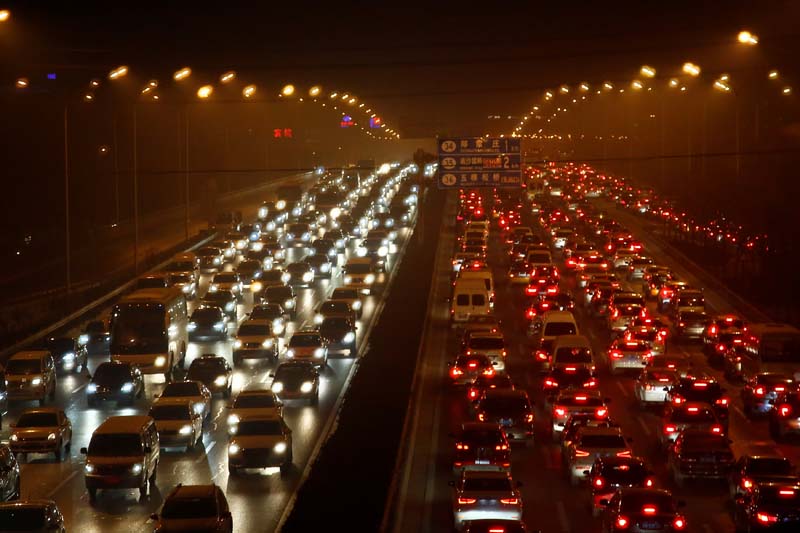 BEIJING: Authorities in Tianjin grounded three dozen flights and closed most highways on Sunday after severe smog blanketed the city, one of more than more than 40 in China's northeast to issue pollution warnings in the past 48 hours.

Air quality index (AQI) readings at some monitoring stations in Tianjin, a port and industrial city southeast of Beijing, peaked above 400, state-run news agency Xinhua said. Anything above 300 is considered hazardous by the US Environmental Protection Agency. China's environmental watchdog issued a five-day warning on Friday about choking smog spreading across the northeast and ordered factories to shut, recommended residents stay indoors and curbed traffic and construction work. Pollution alerts have become increasingly common in China's northern industrial heartland, especially during winter when energy demand - much of it met by coal - skyrockets. In addition, heavy winds force pollution from nearby provinces to the Beijing-Tianjin area where it remains suspended over the cities. By 10 am on Sunday in Tianjin, 35 international flights had been delayed or cancelled and all highways in and out of the city, with one exception, were shut, Xinhua said. With the density of pollutants expected to peak on Sunday and Monday, Tianjin's environmental protection department had strengthened inspections to control sources of pollution including factories. Tianjin was placed on orange alert - the second highest level - on Sunday. On Saturday, 22 cities issued red alerts including top steelmaking city Tangshan in Hebei province around Beijing, and Jinan in coal-rich Shandong province. Red alerts are issued when the AQI is forecast to exceed 200 for more than four days in succession, 300 for more than two days or 500 for at least 24 hours. In Beijing, the city's Municipal Environmental Monitoring Centre showed air quality readings of above 300 in some parts Sunday afternoon, but in most the index was below 200. "When I went out yesterday I didn't wear a mask and my throat really hurt and I felt dizzy. It was hard to breathe through my nose," Chen Xiaochong, a hotel manager in the capital, told Reuters. "This pollution really is quite dangerous for people, so it's important to protect the environment."
#Beijing #Tianjin #US Environmental Protection Agency #Air quality index (AQI)
You May Also like: