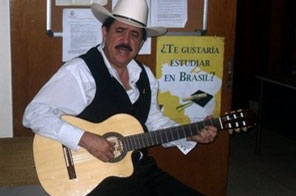 Deposed Honduran President Manuel Zelaya plays the guitar at the Brazilian Embassy in Tegucigalpa. Hondurans vote Sunday for the first time since Zelaya was forced out of the country in June, in elections which have divided the Americas. Source: AFP

TEGUCIGALPA: Hondurans vote Sunday for the first time since President Manuel Zelaya was forced out of the country in June, in elections which have divided the Americas.

The holding of the general elections with Zelaya out of office -- and holed up in the Brazilian embassy -- marks a victory for those behind his ouster, including business leaders, the courts and Congress.

After a subdued campaign alongside post-coup crisis talks and a string of small bomb attacks, the de facto regime has sought to calm the population and try to legitimize the polls.

The United States, which initially froze millions of dollars of aid and condemned the coup, is now backing the polls, to the disappointment of many in Latin America, particularly powerhouse Brazil.

Costa Rica, which mediated initial crisis talks, Panama and Peru have also suggested they will back the elections.

After the United Nations and the 34-member Organization of American States (OAS) declined to assist due to the crisis, the de facto leaders called on dozens of independent observers, including Cuban exiles, right-wing US groups and Japanese diplomats to help monitor the vote.

The crisis has revived left-right political disputes in the region.

Zelaya, a wealthy rancher, swung to the left and allied with Venezuelan President Hugo Chavez after taking office. Backed by the courts, Congress and business leaders, his ouster came after he sought approval to overturn constitutional term limits.

The polls are set to bring impoverished Honduras back to more familiar territory for the ruling elite.

The two favorites are from conservative parties which have traded leadership of Honduras for years, and have close ties to the powerful military.

The frontrunner is broad-grinned 61-year-old Porfirio "Pepe" Lobo, from the National Party, who narrowly lost to Zelaya in 2005.

Levels of participation and the running of the polls will be key in evaluations of the vote's credibility.

Some 30,000 soldiers and police are to provide security for the elections.

Many fear further violence following a heavy-handed crackdown on Zelaya supporters since the coup, and recent bomb attacks.

De facto leader Roberto Micheletti, who has stepped down briefly for the electoral period, on Saturday accused Zelaya's backers of secretly setting up the bombs to disturb the polls.

Zelaya supporters have called for people to stay at home in a boycott and to avoid being blamed for possible clashes.

Rights groups have complained of an environment of intimidation and fear, and condemned several deaths and dozens of arrests in the aftermath of the coup.

A delegation from Amnesty International on Saturday condemned an incident overnight at a military blockade in Tegucigalpa, in which soldiers shot a driver and several bystanders were also hurt, according to eyewitness accounts.

Amid a climate of fear, it was unclear how many of the 4.6 million eligible voters would actually turn out. Participation was just over 50 percent in 2005.

In central Tegucigalpa, 18-year-old student Suyapa said she would not be using her first chance to vote.

"All the politicians are the same and there's no way out. They'll all do the same," she said.

As for Zelaya, the Congress was due to vote on his brief reinstatement -- before his term runs out in January -- on December 2.

#Hondurans vote for post-coup prez
You May Also like: