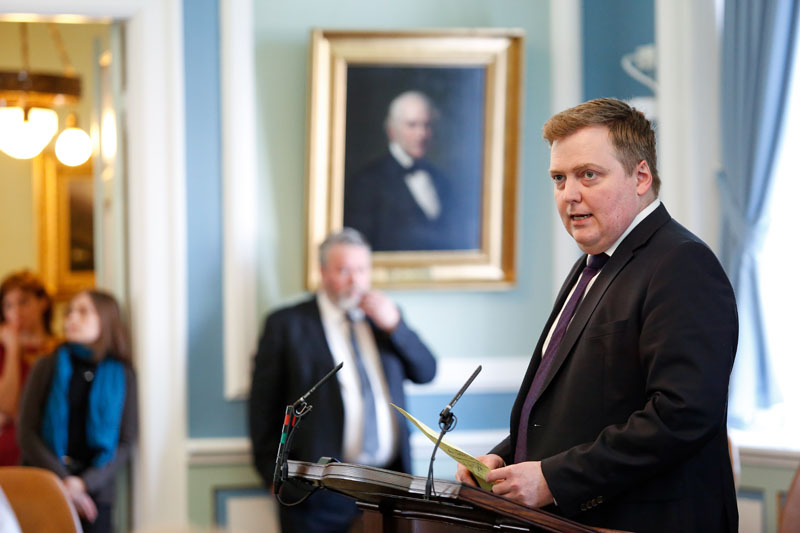 Iceland's Prime Minister Sigmundur David Gunnlaugsson, speaks during a parliamentary session in Reykjavik on Monday, April 4, 2016. Photo: AP
REYKJAVIK: Iceland's president on Tuesday refused a request from the prime minister to dissolve parliament and call a new election amid a dispute over the premier's offshore tax affairs. Embattled Prime Minister Sigmunder David Gunlaugsson is facing growing calls for him to step down because of reported offshore financial dealings by him and his wife that opposition lawmakers say show a significant conflict of interest with his job. Thousands of Icelanders protested outside parliament on Monday, demanding that Gunlaugsson resign, and a similar protest is planned for Tuesday evening. The prime minister will meet with parliament in a session Wednesday expected to be dominated by the topic. President Olafur Ragnar Grimsson, however, said he wants to consult with other party leaders first before agreeing to end the coalition government between Gunlaugsson's center-right Progressive Party and the Independence Party. "I need to determine if there is support for dissolving (parliament) within the ruling coalition and others. The prime minister could not confirm this for me, and therefore I am not prepared at this time to dissolve parliament," Grimsson said. He said he plans to meet with the government's coalition partner "in a few hours" to discuss the crisis caused by the massive leak of documents from a Panamanian law firm that documents widespread abuse of the tax haven system. The impact in Iceland has been most dramatic, but officials in Russia, Ukraine, China and other countries also face questions about possibly dubious offshore schemes. The document leak is sparking calls for transparency and reform as the scope of tax avoidance is revealed. The leaked financial documents allege that the prime minister and his wife set up a company called Wintris in the British Virgin Islands with the help of the Panamanian law firm. Gunlaugsson is accused of a conflict of interest for failing to disclose his involvement in the company, which held interests in failed Icelandic banks that his government was responsible for overseeing. Arni Pall Arnason, leader of the opposition Social Democratic Alliance, said Gunlaugsson's position is not tenable. "I think it's obvious that we cannot tolerate a leadership that is linked to offshore holdings," he said. "Iceland cannot be the only western European democratic country with a political leadership in that position." Gunlaugsson has denied any wrongdoing. He said he and his wife have paid all taxes and done nothing illegal. He also said his financial holdings didn't affect his negotiations with Iceland's creditors. Iceland, a volcanic North Atlantic island nation with a population of 330,000, was rocked by a prolonged financial crisis when its main commercial banks collapsed within a week of one another in 2008. Wide protests helped bring down the government then, and opposition leaders believe similar tactics will topple the prime minister and lead to new elections.
#Iceland's President Olafur Ragnar Grimsson #offshore tax affairs #Prime Minister Sigmunder David Gunlaugsson #Iceland's new vote
You May Also like: