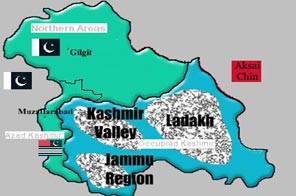 SRINAGAR: The Indian army accused Pakistan of a ceasefire violation along the de facto border dividing Kashmir between the two nations after a gunbattle left two militant infiltrators dead.

"Simultaneously some 14 mortar shells were fired from across the LOC at our positions," Brar said in a statement, terming it a ceasefire violation by the Pakistani soldiers.

"A flag meeting (with Pakistanis) has been sought by us to convey our concerns in no uncertain terms regarding the ceasefire violation that occurred last night," Brar said.

India in the past has accused the Pakistani army of providing covering fire for infiltrating militants. Islamabad denies the charge.

"By killing the militants we have foiled a major infiltration attempt," Brar said, adding that one of the slain militants was carrying a Pakistani army identity card.

"It has been sent to higher headquarters in New Delhi for detailed analysis," the spokesman said.

India and Pakistan have fought two of their three wars over mainly Muslim Kashmir, held in part by each country but claimed in full by both.

They agreed to a ceasefire along the Line of Control in 2003 and launched a peace process in 2004. Since then there have been sporadic small clashes with both sides accusing each other of violating the ceasefire.

Violence has sharply declined since the start of the peace process.

An insurgency against New Delhi's rule in Indian Kashmir has raged since 1989.

Meanwhile, thousands of Kashmiris chanting, "We want freedom" and "Allah is great" Friday held an anti-India rally in the northern town of Baramulla, an AFP photographer said.

The hardline political leader, hailed a hero by armed rebels, had managed to reach Baramulla town, about 55 kilometres (34 miles) north of state summer capital Srinagar, after giving police the slip.

#India accuses Pak of Kashmir ceasefire violation
You May Also like: