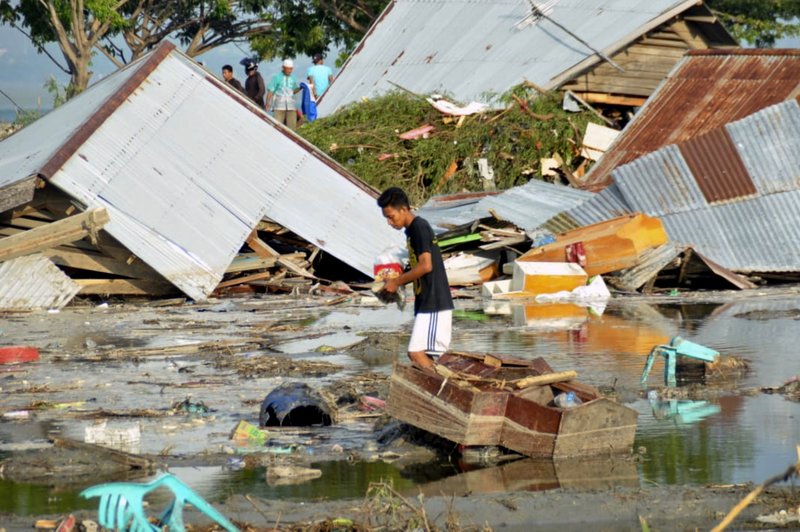 A man surveys the damage caused by earthquake and tsunami in Palu, Central Sulawesi, Indonesia, on Saturday, Sept. 29, 2018. Photo: AP
PALU, INDONESIA: The powerful earthquake and tsunami that hit Indonesia’s central Sulawesi province has claimed many victims, a disaster official said Saturday, as rescuers raced to reach the region and an AP reporter saw numerous bodies in a hard-hit city. Disaster officials haven’t released an official death toll but reports from three hospitals seen Saturday by The Associated Press listed 18 dead. Dawn revealed a devastated coastline in central Sulawesi where the 3-meter high (10 foot) tsunami triggered by a magnitude 7.5 earthquake Friday smashed into two cities and several settlements. Disaster agency spokesman Sutopo Purwo Nugroho said in a television interview there are “many victims.” In Palu, the capital of Central Sulawesi province, a large bridge spanning a coastal river had collapsed and the city was strewn with debris. The city is built around a narrow bay that apparently magnified the force of the tsunami waters as they raced into the tight inlet. An AP reporter saw bodies partially covered by tarpaulins and a man carrying a dead child through the wreckage. Indonesian TV showed a smartphone video of a powerful wave hitting Palu, with people screaming and running in fear. The water smashed into buildings and a large mosque already damaged by the earthquake. Communications with the area are difficult because power and telecommunications are cut, hampering search and rescue efforts. Nugroho said the runway of Palu’s airport is not damaged and essential aircraft can land there. UN spokesman Stephane Dujarric said UN officials were in contact with Indonesian authorities and “stand ready to provide support as required.” Indonesia is prone to earthquakes because of its location on the “Ring of Fire,” an arc of volcanoes and fault lines in the Pacific Basin. In December 2004, a massive magnitude 9.1 earthquake off Sumatra in western Indonesia triggered a tsunami that killed 230,000 people in a dozen countries.
#Indonesia #earthquakes #Asia-Pacific #Science #tsunamis
You May Also like: