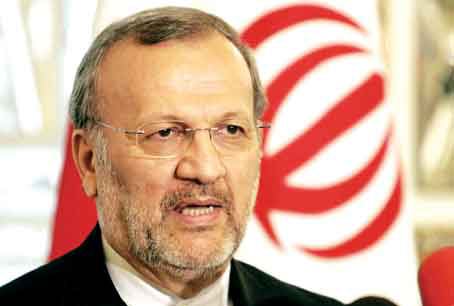 TEHRAN: Iran has not rejected a UN-brokered offer to exchange enriched nuclear fuel but it wants a staged swap rather than a wholesale handover of most of its stockpile, foreign ministry officials said in comments published Thursday.

"Iran did not reject the principle of the exchange (of nuclear fuel)," Foreign Minister Manouchehr Mottaki was quoted as saying by the Mehr news agency.

His denial followed charges by Western diplomats that Iran had effectively rejected a proposal put forward by six major powers in talks in Vienna brokered by the International Atomic Energy Agency, the UN's nuclear watchdog.

"Our position has not changed from what we already expressed in the past -- we are ready for a gradual exchange of fuel," Mehr quoted foreign ministry spokesman, Ramin Mehmanparast, as saying.

But his comments suggested that Iran remains at odds over the proposals with the six powers -- Britain, China, France, Germany, Russia and the United States.

The IAEA plan calls on Iran to hand over most of its stocks of low-enriched uranium in return for the phased supply by France and Russia of nuclear fuel enriched to the higher level required for a Tehran research reactor.

Iran insists it will only hand over its stocks gradually as it receives the fuel.

Western diplomats in Vienna said on Wednesday that Iran's insistence on a phased exchange effectively amounted to a rejection of the IAEA offer.

Western governments regard Iran's prior handover of most of its stocks of low-enriched uranium as a central plank of the deal as it will provide reassurance that the stockpiles will not be covertly enriched further to the much higher level required for a nuclear weapon.

Iran has always denied any such ambition, insisting that its nuclear programme is for civilian programmes only.

But the IAEA said talks on its plan were still continuing, and that the offer to Iran remained on the table.

The proposal, made last October, "which was supported by France, Russia and the United States, continues to be on the table," said the watchdog's spokeswoman, Gill Tudor.

"The IAEA is not in a position to discuss the views of the parties involved, but it is aware that they are considering the best solution," Tudor added.

A Western diplomat in Vienna told AFP that Iran had effectively given a formal response at a meeting between its ambassador Ali Asghar Soltanieh and the IAEA's new new chief Yukiya Amano earlier this month.

According to the diplomat, Soltanieh had verbally reiterated the Islamic republic's earlier position, including the insistence on a gradual swap.

The IAEA refused to say whether the meeting took place or discuss its possible content.

Another diplomat said it was unclear whether Iran had actually delivered a written response. But "certainly there was no agreement to the TRR (Tehran research reactor) proposal," the diplomat said.

After the proposal was delivered to Iran in October, the powers gave it until the turn of the year to accept the deal but the deadline was ignored, prompting talk of fresh sanctions.

In Washington on Tuesday, US State Department spokesman Philip Crowley said: "I am not sure that they have delivered a formal response, but it is clearly an inadequate response."

On January 5, Iran repeated its counter-proposal for a phased fuel swap, but left the "details" open to discussion.

Mottaki has insisted that Tehran in fact has until the end of January to reach a uranium swap deal, stressing it will press on with plans to enrich nuclear fuel to a higher level itself if there is no agreement.

Mottaki gave the West a one-month "ultimatum" to accept the Iranian counter-proposal.

Iran is already under three sets of sanactions over its refusal to heed repeated UN Security Council ultimatums to suspend enrichment.

The sensitive process lies at the heart of Western fears over Iran's nuclear programme as it can produce the fuel for nuclear reactors or in highly extended form the fissile core of an atomic bomb.

#Iran denies rejecting nuke swap offer
You May Also like: