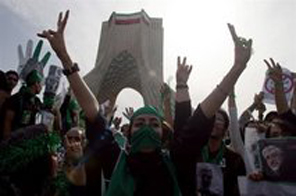 TEHRAN: Campaigning for Iran's hotly contested presidential election wrapped up after three weeks of mass rallies, a series of fiery television debates and mudslinging among the four candidates.

Friday's poll has emerged as a tense race between incumbent hardliner Mahmoud Ahmadinejad and his main challenger, moderate Mir Hossein Mousavi, who is seeking a comeback after two decades in the political wilderness.

Polls open on Friday at 8:00 am (0330 GMT) and may remain continue until midnight depending on turnout, election officials have said.

Campaigning, which began on May 22, saw Iranians pour into streets and party until dawn in support of their favourite candidates, mainly Mousavi and Ahmadinejad.

This year's campaign has been almost unprecedented in its ferocity, with candidates hurling insults and allegations of lying and corruption at each other on prime time television.

Observers say the level of mudslinging has never been seen before in the Islamic republic.

"One thing is clear. Iran will never have television debates involving presidential candidates in the future. They just did not handle it with maturity," said one foreign diplomat based in Tehran.

#Iran wraps up election campaign
You May Also like: