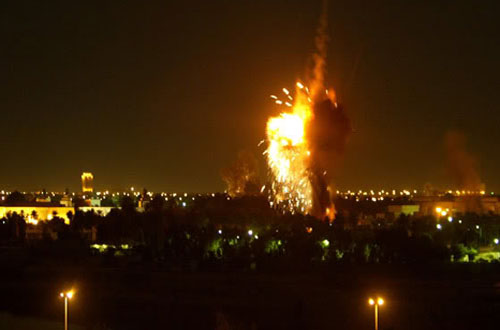 "There was insufficient legitimacy" for the invasion for which the Netherlands gave political but no military backing, commission chairman Willibrord Davids told journalists in The Hague.

The commission's report said the wording of UN resolution 1441 "cannot reasonably be interpreted (as the Dutch government did) as authorising individual member states to use military force to compel Iraq to comply with the Security Council's resolutions."

The resolution, passed in 2002, had offered Iraq "a final opportunity to comply with its disarmament obligations".

The Dutch commission, which started its work in March last year, was set up by the government following pressure from opposition politicians and the public for a probe of claims that crucial data had been withheld from Dutch decision-makers who opted to support the US-led action.

The Netherlands had sent about 1,100 troops to Iraq in July 2003 to take part in a post-invasion, UN-mandated Iraqi stabilisation force. They left Iraq in 2005.

The probe found that Dutch policy on the issue had been defined by the foreign ministry under then minister Jaap de Hoop Scheffer, who later became NATO secretary-general.

"The Prime Minister (Jan Peter Balkenende, still premier today) took little or no lead in debates on the Iraq question; he left the matter of Iraq entirely to the minister of foreign affairs," the report said.

The commission also found that Dutch intelligence services did not have "any significant amount of independently sourced information" that Iraq possessed weapons of mass destructions -- the main justification used by the United States and Britain for the war. None were ever found.

Balkenende has repeatedly stated that Dutch backing for the invasion was based on then-Iraqi leader Saddam Hussein's refusal to respect UN Security Council resolutions.

The commission report said the Dutch government did not disclose to parliament the full content of a 2002 US request for support.

But there was "no evidence", it added, to support rumours that the Netherlands had made a clandestine military contribution to the invasion.

Last month, a former UN weapons inspector said former US president George W. Bush and British Prime Minister Tony Blair shared a conviction that Hussein was a threat, blinding them to the lack of evidence justifying war and causing them to mislead the public.

An official inquiry has started in Britain, with Blair set to testify in the coming weeks into the intelligence used to make a case for war.