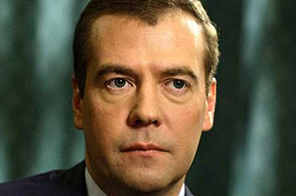 MOSCOW: Israeli President Shimon Peres has given Russia assurances his country is not planning a strike against Iran, Russian President Dmitry Medvedev said in an interview with CNN released on Sunday.

"When Israeli President Peres was visiting me in Sochi recently, he said something very important for all of us: 'Israel does not plan any strikes on Iran, we are a peaceful country and we will not do this'," he said.

In the interview posted on the Kremlin's website, Medvedev said such an attack would be "the worst thing that can be imagined", and hinted Russia could take sides in the conflict if Israel did attack.

Although Russia has no military alliances with Iran, "it does not mean that we would like to be or will be indifferent to such a development," he said.

Medvedev said any strike on Iran would be "extremely unreasonable" but added: "My Israeli colleagues told me that they were not planning to act in this way."

In the interview posted on the Kremlin website, Medvedev also told how Israeli Prime Minister Benjamin Netanyahu made a secret visit to Moscow this month and held talks with him.

"Prime Minister Netanyahu has visited Moscow. They did this in a closed regime, this was their decision. I do not even understand very well the reasons for it," he added.

But Medvedev said Russia reserved the right to sell missiles to Iran, including S-300s, which Moscow classify as a defensive weapon.

"Our relations with Iran have a military component," Medvedev said. "What we have supplied and are going to supply has always been defensive weapons systems.

"I will hold to this when making final decisions as to the all existing contracts with Iran."

Israel has for years tried to convince Russia not to sell the S-300s to Tehran, which Israel fears Iran could use to rebuff a strike against its nuclear sites.

#'Israel won't attack Iran' Medvedev
You May Also like: