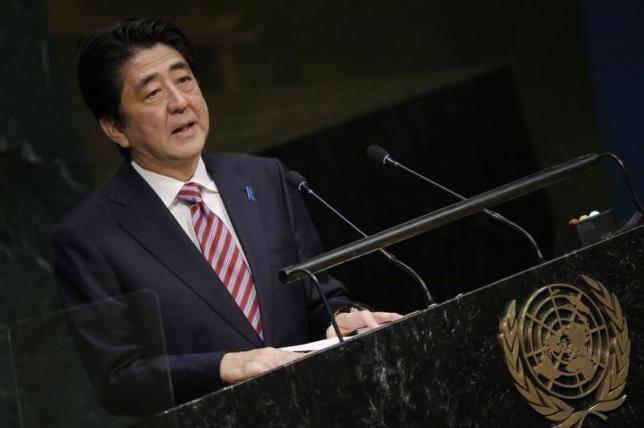 Japanese Prime Minister Shinzo Abe speaks before attendees during the 70th session of the United Nations General Assembly at the U.N. Headquarters in New York, September 29, 2015. REUTERS
UNITED NATIONS: Japan's prime minister said on Tuesday that his country would provide some $1.6 billion to assist Syrians and Iraqis displaced by conflict and for building peace across the Middle East and Africa. Shinzo Abe told the United Nations General Assembly that Japan would boost its assistance for refugees and internally displaced people from Syria and Iraq this year to about $810 million, three times the amount provided last year. He added that Japan would also provide about $750 million for peace building efforts across the Middle East and Africa. But the premier brushed off any suggestion that Japan - which accepted just 11 of about 5,000 asylum seekers last year - would take in any refugees from the Syria conflict, the world's worst migrant crisis since World War Two. Asked at a New York news conference whether Japan would accept Syrian refugees, Abe replied with the government's general response that the country needs to boost its own workforce with such steps as empowering more women and older people to work. "Regarding the issue of population, there are many things that we should do before accepting immigrants," he said, adding, "Japan would like to contribute by changing the conditions that give rise to refugees."
#Syria #Iraq #Japan #refugees #Shinzo Abe
You May Also like: