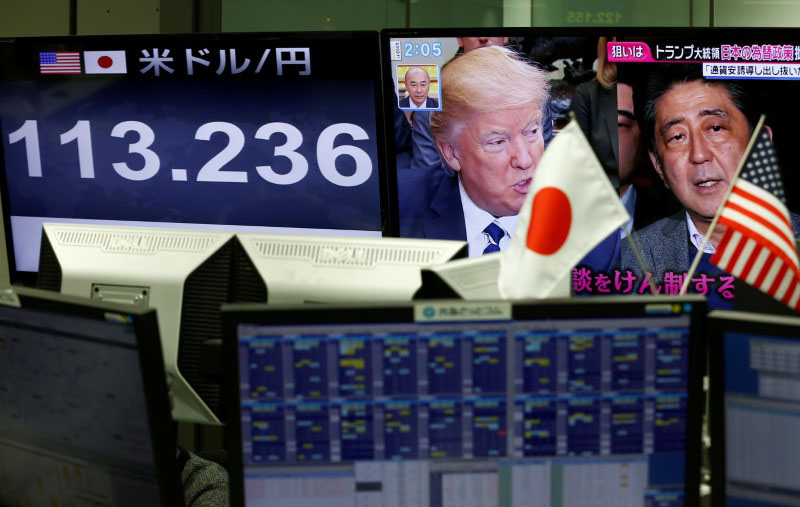 A TV monitor showing US President Donald Trump and Japanese Prime Minister Shinzo Abe is seen next to another monitor showing the Japanese yen's exchange rate against the US dollar at a foreign exchange trading company in Tokyo, Japan, on February 1, 2017. Photo: Reuters
TOKYO:  Japanese Prime Minister Shinzo Abe will propose new cabinet level US-Japan talks on trade, security and macroeconomic issues, including currencies, when he meets US President Donald Trump on Friday, a Japanese government official involved in planning the summit said. Abe heads to Washington later on Thursday hoping promises to help create US jobs and bolster Japan's military will persuade Trump to turn down the heat on trade and currency and stand by the decades-old alliance. "In a situation in which security relations in the Asia-Pacific region are increasingly severe, it is very important to demonstrate the unshakeable US-Japan alliance at home and abroad," Japanese Chief Cabinet Secretary Yoshihide Suga told a news conference. "This is the most important theme of the US-Japan leaders summit," he said, adding it was also vital to have constructive discussions on how to create a "win-win" relationship by further strengthening US-Japan economic ties. Trump has lumped Japan with China and Mexico as big contributors to the US trade deficit, targeted its auto trade as "unfair" and accused Tokyo of using monetary policy to devalue its currency to boost exports. During his election campaign, Trump complained Tokyo was not sharing enough of the cost of the US security umbrella although his defense secretary, Jim Mattis, assured Japan the alliance was firm when he visited the country last week. Abe, who will be accompanied by Finance Minister Taro Aso and Foreign Minister Fumio Kishida, will bring a package of steps Tokyo says could create 700,000 US jobs through private-public investment in infrastructure such as high-speed trains, government sources say. Trump, who abandoned the 12-nation Trans-Pacific Partnership (TPP) trade pact championed by his predecessor Barack Obama and Abe as a counterweight to a rising China, has made clear he wants a bilateral free trade agreement (FTA) with Tokyo instead. PLAYING FOR TIME? Abe has left the door open to FTA talks but Japanese officials worry such negotiations would boost pressure on politically sensitive sectors such as agriculture while yielding few economic benefits for Japan. The new cabinet level talks, the government official told Reuters, would be a way of buying time rather than opening FTA talks at an early stage. Tokyo and Washington already have a cabinet-level mechanism for security talks, the so-called "2-plus-2" meetings of defense and foreign ministers. The new economic framework will be headed by Aso, who is also deputy prime minister, and US Vice President Mike Pence, and would address a range of issues, with a focus on crafting trade policies and measures to bolster US employment, said a report in the Nikkei business daily. Abe is likely to propose crafting highly liberal rules for trade and investment in areas such as intellectual property protection, rules of origin, regulations on state-owned companies and e-commerce, the Nikkei said. Japan hopes such bilateral rules would be similar to those agreed upon in the TPP and could be extended to cover the Asia-Pacific region to counter China's growing clout, it added. The two nations are also preparing statements regarding economic cooperation and security to be issued after the summit meeting, the Nikkei said. Abe and Trump will also play a round of gold in Florida this weekend after the meeting at the White House on Friday and Trump said he will make sure the Japanese leader is his partner in the game, rather than a competitor.
#Donald Trump #Shinzo Abe #Asia-Pacific region #Japan-US relations
You May Also like: