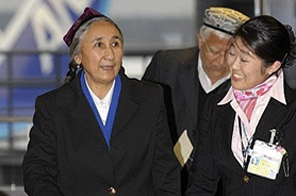 TOKYO: Exiled Uighur leader Rebiya Kadeer, alleging that China has "destroyed" her Muslim people, is urging Japan's new government not to ignore their plight as it presses to bolster ties with Beijing.

Kadeer was speaking during a visit to Japan, where Prime Minister Yukio Hatoyama's centre-left government took power five weeks ago vowing to improve regional ties and to promote an EU-style Asian community.

US-based Kadeer, whom China labels a separatist, arrived Tuesday for a 10-day visit, her second trip to Japan this year, triggering an immediate protest from China against Japan for allowing her entry.

Speaking with AFP late Tuesday, Kadeer criticised China for rights abuses but said she was ready to talk with Beijing on improving ethnic minority policies as she seeks "self-determination" for her people.

"I hope Japan will talk with the Chinese government about the problem," added the grandmother and mother-of-11.

"Japan plays a very important role in Asia. So it's a responsibility of Japan to talk about the Uighurs' problems."

During her previous visit to Japan, in July, Kadeer said 10,000 Uighurs had "disappeared" after unrest that erupted on July 5 in the Xinjiang capital Urumqi, pitting Uighurs against members of China's dominant Han group.

Kadeer said Tuesday that "according to new information we have obtained, from July 5 to October 1 more than 10,000 Uighurs have been arrested and jailed, but how many have died, or been killed, how many have been jailed, nobody knows the exact number."

China blames Kadeer for fomenting the unrest, which it says left 197 people dead and more than 1,600 injured, mostly Han.

Uighurs say the unrest was triggered when police cracked down on peaceful protests over a June brawl at a factory in southern China that state media said left two members of the minority group dead.

Kadeer said she had learnt that "out of the 11 Uighurs who were sentenced to death... nine people have been executed.

"Punishing people who demonstrated peacefully is not necessary," she said, speaking though an interpreter.

However, Kadeer's pleas to Japan for help run counter to Hatoyama's declared aim to erase the distrust and frequent animosity that marked Tokyo's relations with Beijing under previous conservative governments.

"We want to reiterate that China is firmly against national separatism and is firm in upholding our national unity," he said.

Kadeer, a former businesswoman who was jailed in China from 1999 to 2005 and now lives in exile in a suburb of Washington, called on China to allow the Uighur people "self-determination."

She said her people now wanted autonomy and would decide later on whether to seek full independence.

"We will talk about this point when China sits at the table for negotiations. We will see how Chinese people give us human rights and freedom for the Uighurs, and then we will decide on this."

For now, Kadeer said, "the Chinese government should grant us autonomous rule, but there is no autonomous regime allowed in Xinjiang.

"So they destroyed our nation, our economy, education, religion, rights of free speech and publishing, and they arrested many Uighurs and sent them to jail."

#Kadeer urges Japan to press China
You May Also like: