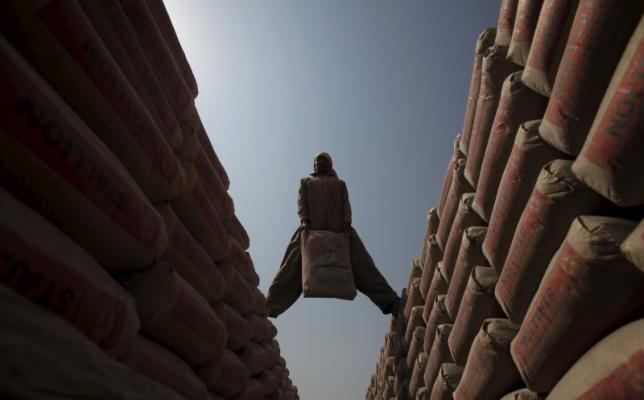 A labourer moves sacks of cement from one truck to another bound for Afghanistan at a transit depot in Peshawar, Pakistan September 16, 2015. REUTERS
ISLAMABAD: Pakistan and Afghanistan have shelved a raft of agreements that promised to more than triple cross-border trade, officials said, as economic ties seen as key to regional stability fall victim to rivalry and suspicion. Afghan President Ashraf Ghani struck the trade deals with Pakistan soon after taking office last year as part of a broader rapprochement that included plans to share intelligence on Taliban insurgents active in both countries. That cooperation was aimed at tackling the Islamist militant movement, which has separate Afghan and Pakistani branches whose violent campaigns kill thousands of people each year and hamper much-needed development. The trade deals were supposed to be a step towards warmer relations and boosting Afghanistan-Pakistan trade from $1.6 billion now to $5 billion by 2017. But officials told Reuters that the agreements, which include reducing tariffs and granting each other preferential trade status, have stalled. "There has been no progress or further meetings for months since those agreements were signed," said Musafer Qoqandi, the Afghan Commerce Ministry's spokesman. The key bone of contention was whether Pakistan would allow trade from old rival India to cross its territory. The setback first emerged in April, but neither side was willing to discuss it amid attempts to salvage the agreements and maintain the appearance of unity. But political relations deteriorated after a spate of Taliban attacks in Afghanistan last month, including several large blasts in Kabul, and the impasse over trade spilled into the open, further complicating efforts to save the deals. Some Afghans blame Pakistan for supporting the Taliban, charges that Pakistan denies. As diplomats from the two countries swap blame, some are wondering how they can control militancy together if they cannot make progress on trade. "If Pakistan and Afghanistan aren't able to agree on relatively simple trade initiatives that benefit both countries, how can they be expected to make progress in security co-operation?"​ asked Vaqar Ahmed, deputy executive director at Islamabad's Sustainable Development Policy Institute (SDPI). DISAGREEMENTS OVER INDIA Muzamel Shinware, Afghanistan's deputy commerce minister, told Reuters that it was "illogical and unfair" not to include Indian trade crossing Pakistan into Afghanistan. Under the terms of the agreements, Pakistan was to have been allowed to ship its goods to markets in Central Asia and beyond via Afghan territory. But the row over Indian goods has jeopardised the deals, with India and Pakistan locked in a decades-old standoff. "If you put India on the table, then the whole thing stops," said a Pakistani official, speaking on condition of anonymity. Pakistani Commerce Minister Khurram Dastgir Khan confirmed that progress was stalled and blamed Afghanistan for failing to deliver promised lower levies on Pakistani transit trade and to begin negotiations on a preferential trade agreement. Afghanistan, in turn, blamed Pakistan. A senior Afghan official, who asked not to be named, said that the progress on trade made since Ghani's visit to Pakistan in November "could, frankly, have been made in two weeks if we were serious". In November, Pakistan promised faster clearance of Afghan cargo, greater access for Afghan traders to Pakistan's railway system and to set up 'parallel track' Afghan customs at Karachi. Dastgir Khan says most of those steps have been implemented, although some officials privately concede that progress in recent months has stalled as relations chilled. Part of the problem is that the Pakistani military retains the final say in bilateral ties, experts say. The powerful military has ruled Pakistan for around half its history and heavily influences security and foreign policy. "(The Pakistani commerce ministry's) hands are too tied," said an Islamabad-based consultant who has worked closely with the ministry. "(They) need to take clearance on each and every petty issue on Pak-Afghan trade." One country benefitting from the chill between Pakistan and Afghanistan is neighbouring Iran. Afghan transit trade with Iran has increased steadily since 2007. In 2011, it supplanted Pakistan as Afghanistan's largest transit trade partner in terms of containers shipped, according to SDPI. "Perhaps Pakistan thinks that it is twisting Afghanistan's arm by stopping these trade initiatives," said Ahmed of SDPI. "But very soon, Iran could make Pakistan irrelevant."
#Pakistan #India #trade deal #Afghanistan
You May Also like: