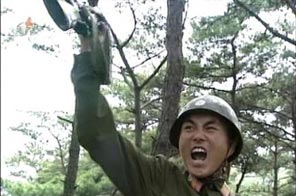 SEOUL: A North Korean patrol boat was set ablaze after exchanging fire with South Korea's navy on Tuesday, Seoul officials said, as cross-border tensions rose a week before a scheduled US presidential visit.
The two sides blamed each other for the clash, the first for seven years near the disputed Yellow Sea border.
President Lee Myung-Bak called an emergency meeting of security ministers as his Prime Minister Chung Un-Chan accused the North of making a "direct attack" on a South Korean high-speed patrol craft.
"There was no damage on our side while a North Korean patrol boat engulfed in flame sailed back (across the border)," Chung told parliament.
He described the clash, which follows recent peace overtures from the North, as unplanned and urged people to stay calm.
Some analysts, however, said Pyongyang may be sending President Barack Obama a message, eight days before he arrives in South Korea as part of an Asian tour.
Defence Minister Kim Tae-Young told parliament the North's boat sailed more than 1.6 kilometres (one mile) south of the border and "I believe they clearly knew about the intrusion".
The Joint Chiefs of Staff said the South's boat sent several warning signals after the North's craft crossed the border, but the intruder held its course.
After the South fired warning shots, "the North's side opened fire, directly aiming at our ship. Then our ship responded by firing back, forcing the North Korean boat to return to the north," the statement said.
"There were no casualties on our side. We are on the lookout for any further provocations by the North," it said.
"We fired heavily on the North Korean vessel," an unidentified navy official told Yonhap news agency, adding the initial assessment was that it suffered considerable damage.
"We express our strong protest to North Korea and urge it to prevent a recurrence of such incidents," said Brigadier-General Lee Ki-Sik of the Joint Chiefs of Staff.
He said the two sides exchanged fire for two minutes from a distance of about three kilometres. The North fired about 50 rounds, 15 of which hit the South Korean boat.
The border known as the Northern Limit Line (NLL) has always been a potential flashpoint and was the scene of bloody naval clashes in 1999 and 2002.
General Lee said the North breached the NLL 22 times this year. But this was the first time the South had to fire warning shots, because the patrol boat kept intruding despite five warning signals.Chronology: NKorea, SKorea clashes
North Korea's military, however, told its South Korean counterpart to apologise for a "grave armed provocation" and said Seoul's ships had opened fire while its craft was north of the border.
In a report on Pyongyang's official media, the North said its boat "lost no time to deal a prompt retaliatory blow at the provokers".
"This might be an intentional clash aimed at heightening tension ahead of Obama's trip," Kim Yong-Hyun, a professor at Dongguk University, told YTN television.
"I believe North Korea is trying to show Obama the volatility of the peninsula. North Korea has demanded a peace pact be signed with the US to replace the truce agreement (which ended the 1950-53 war)."
Yoo Ho-Yeol of Korea University said the clash appeared intended to raise tension before Obama's visit. "North Koreans believe tension helps them strengthen their bargaining power," he told Yonhap.
But Yang Moo-Jin of Seoul's University of North Korean Studies told AFP that if it had been a deliberate provocation, the North would have mobilised more than one patrol boat.
The clash came amid Pyongyang's peace feelers to Seoul and Washington after months of hostility marked by its missile test-launches and a nuclear test.
The North has invited US special envoy Stephen Bosworth to Pyongyang for talks on ending the standoff about its nuclear weapons programme. Washington was expected to decide soon to go ahead with the trip.

#Korean warships clash near sea
You May Also like: