TAIPEI, TAIWAN: Lawmakers in Taiwan got into a fist fight and threw pig guts at each other Friday over a soon-to-be enacted policy that would allow imports of US pork and beef. 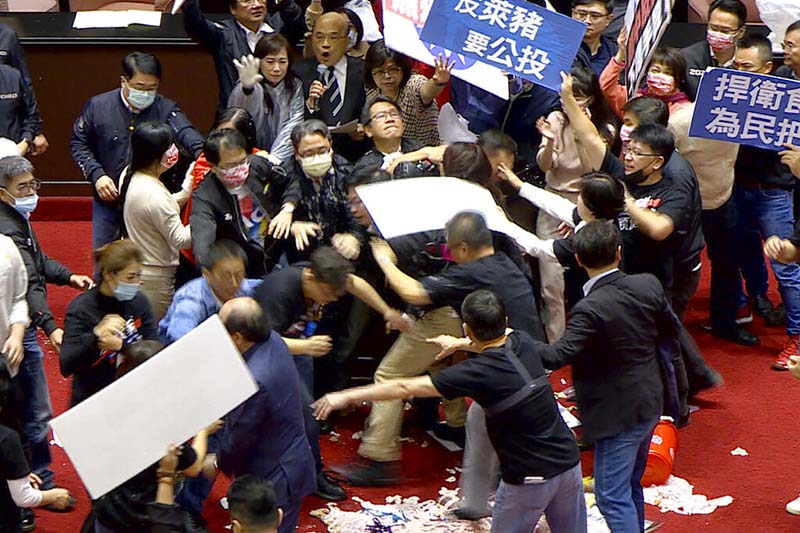 In this image made from video, lawmakers fight during a parliament session in Taipei, Taiwan, on Friday, November 27, 2020. Taiwan's lawmakers got into a fist fight and threw pig guts at each other on Friday over a soon-to-be enacted policy that would allow imports of US pork and beef. The banner at center top reads: “Protest against ractopamine pork, We want a referendum.” Image: FTV via AP
Premier Su Tseng-chang was due to give a regularly scheduled policy report to lawmakers on Friday morning about the pork policy when opposition party lawmakers from the Nationalist party, also known as the KMT, blocked his attempt to speak by dumping bags of pig organs. Legislators from the ruling Democratic Progressive Party attempted to stop them, resulting in chaos and an exchange of punches. A DPP lawmaker wrestled a KMT lawmaker to the floor in the scuffle. President Tsai Ing-wen’s administration lifted a longstanding ban on imports of U.S. pork and beef in August, in a move seen as one of the first steps toward possibly negotiating a bilateral trade agreement with the U.S. The ban is due to be lifted in January. That decision has met with fierce opposition, both from the KMT and individual citizens. The new policy allows imports of pork with acceptable residues of ractopamine, a drug that some farmers add to animal feed that promotes the growth of lean meat. On Sunday, thousands of people marched in Taipei to protest the imports. U.S. pork would account for a small percentage of the island’s consumption, but the Nationalist party has seized on the issue in an effort to mobilize support following successive failures at the polls. “When you were in the opposition, you were against U.S. pork, now that you’re in power, you’ve become a supporter of U.S. pork,” said KMT legislator Lin Wei-chou, who led the group of lawmakers protesting the policy on Friday. They wore black T-shirts that read “oppose ractopamine-pork." DPP lawmakers called for peace. “You have blocked Premier Su from reposting to the parliament for 12 times, ” said Hsu Sheng-chieh, a DPP legislative member. “Please return to reason.”
#parliament #Taiwan #Pork Fight #US pork and beef imports #pig guts
You May Also like: