Malaysia arrests 6 people, says they may have aided Bangkok bomber 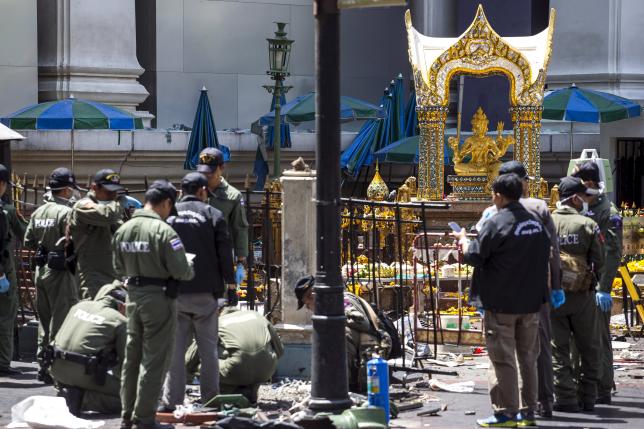 Experts investigate the Erawan shrine at the site of a deadly blast in central Bangkok, Thailand, August 18, 2015. Photo: Reuteres
KUALA LUMPUR/BANGKOK: Malaysia has arrested six people suspected of being part of a human trafficking network and who may have helped a bomber who killed 20 people at a Bangkok shrine last month escape from Thailand, police said on Wednesday. The suspects joined two people already in Malaysian detention who may have helped the bomber, who Thai police said was a foreigner of unknown identity, flee across southern Thailand's border with Malaysia, police in both countries said. Four of the six people arrested last week were believed to be minority Uighur Muslims, who come from China's far western Xinjiang region, said Ayob Khan Mydin Pitchay, director of the Malaysian police counter-terrorism unit. Thai police have made two arrests over the Aug. 17 blast, Thailand's worst ever bombing, that killed 20 people, including 14 foreigners, seven from Hong Kong and mainland China. The chief suspect is a man in a yellow shirt caught on security camera footage leaving a backpack at the shrine. He was implicated by a man in Thai detention who admitted to delivering the bag containing the bomb to him, police say. Ayob told Reuters the six were not directly linked to the bombing but to a human-trafficking gang. "We believe that they facilitated the movement of the yellow-shirt man but we cannot confirm since it is an ongoing investigation," Ayob said. Malaysia's arrests are the latest pieces in a puzzle pointing toward a connection to Uighurs that Thai authorities have sought to play down. Thai police have ruled out a political motive linked to Uighurs for the blast, suggesting instead the reason was that a human trafficking gang was angered by a police crackdown. A Thai police investigator who had just returned from Malaysia confirmed the suspected bomber was not among the latest suspects, who were likely part of the trafficking network. The Uighur issue could be a thorny one for Thailand and any substantive link between the bombing and Thailand's forced repatriation of 109 Uighurs at China's behest in July could result in criticism that its foreign policy may have triggered the attack. "They are not terrorists because they haven't announced what they want," Thai police spokesman Prawut Thawornsiri told reporters on Wednesday. Thousands of Uighurs have tried to flee China saying they face persecution, which Beijing rejects. Many use trafficking networks through Southeast Asia to Turkey, where they are largely welcomed and have ethnic and religious affinity. Suspects believed to be Turkish and Thais living in Turkey are among those on Thailand's wanted list for the bombing.
#Malaysia #Uighurs #Thailand #Thai police #South East Asia #Erawan Shrine #Bangkok bombing #Thailand bombing
You May Also like: