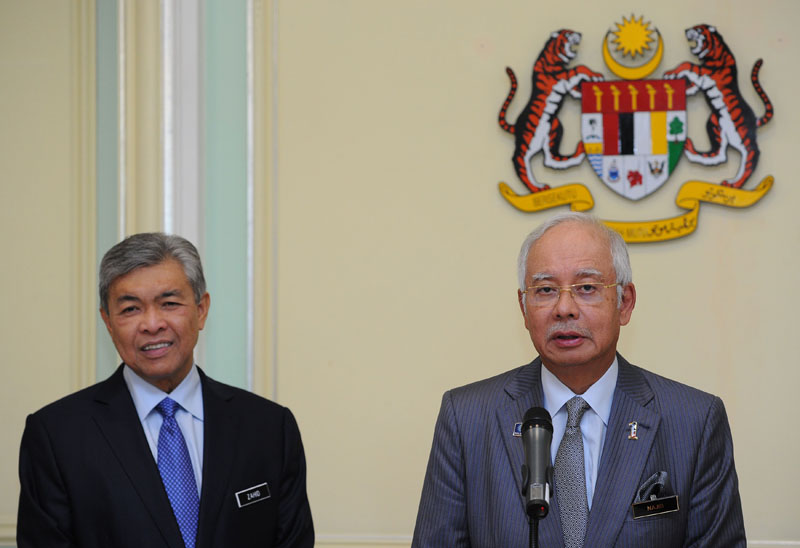 Malaysia's Prime Minister Najib Razak (R) addresses a press conference as his newly-appointed Deputy Prime Minister Ahmad Zahid Hamidi (L) smiles at the Prime Minister's office in Putrajaya on July 28, 2015, following a cabinet reshuffle. Photo: AFP
KUALA LUMPUR: Embattled Malaysian Prime Minister Najib Razak on Tuesday replaced his deputy premier and sacked his attorney general amid a growing scandal that threatens his hold on office. Deputy Prime Minister Muhyiddin Yassin, who has been critical of Najib's handling of the scandal involving state-owned development company 1Malaysia Development Berhad (1MDB), was replaced, Najib said in a televised address. State-run Bernama news agency said the premier also sacked Attorney General Abdul Gani Patail, who was involved in investigations into corruption allegations related to the Najib-linked company. The prime minister and 1MDB have vehemently denied any wrongdoing. Muhyiddin had repeatedly lent his weight to mounting public calls for Najib to answer allegations that hundreds of millions of dollars of 1MDB money had gone missing in complex overseas transactions that have never been fully explained. Najib appeared to allude to Muhyiddin's criticisms in announcing his replacement. "Any difference in opinion is not supposed to be expressed in an open forum, which is against the concept of collective responsibility in the government," Najib said. Muhyiddin was replaced by current Home Minister Zahid Hamidi, Najib said. Najib has come under mounting pressure over the past year amid a drip-feed of allegations related to 1MDB, which he launched in 2009. He still chairs its advisory board. The Wall Street Journal reported this month that Malaysian government investigators had discovered that nearly $700 million had moved through government agencies, banks and companies linked to 1MDB before ending up in Najib's personal accounts. The premier has denied the report as "political sabotage", while 1MDB has said it did not transfer any funds to the premier. 1MDB is reeling under 11 billion dollars in debt, blamed largely on a much-questioned drive to acquire power-industry assets. Fears that it may collapse or need a massive bailout have contributed to a recent slide in the ringgit currency to 17-year lows. A government statement cited by Bernama said Gani's appointment had been "terminated effective July 27 due to health reasons". But the announcements touched off speculation that Najib was moving to contain the damage from the scandal. Last week the home ministry suspended for three months the publishing permits of The Edge Media Group, which is known for its aggressive reporting on 1MDB. The overseas Sarawak Report, an activist website that had also published a series of exposes, has also been blocked.
#Malaysia #Malaysian Prime Minister Najib Razak #Malaysia politics #Malaysia corruption #Deputy Prime Minister Muhyiddin Yassin #Bernama news agency #Attorney General Abdul Gani Patail #Zahid Hamidi
You May Also like: