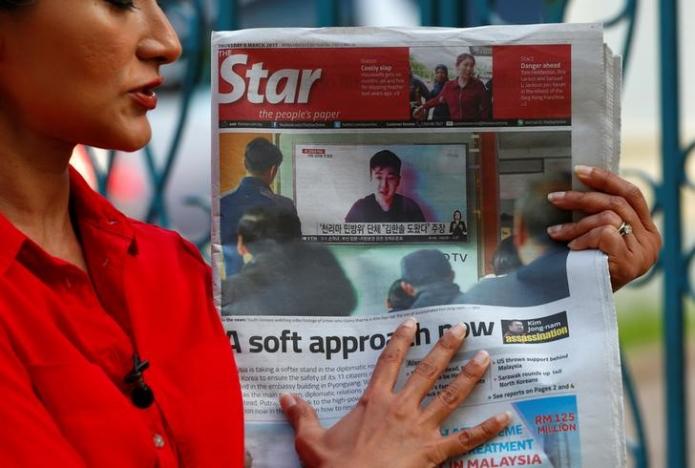 A journalist holds up a newspaper showing a photo of a man who claims to be the son of Kim Jong Nam outside the North Korean embassy in Kuala Lumpur, Malaysia March 9, 2017. REUTERS/Edgar Su/Files
KUALA LUMPUR: Malaysia has confirmed the identity of Kim Jong Nam's body based on a DNA sample taken from one of his children, the deputy prime minister said on Wednesday. Kim Jong Nam, the estranged half-brother of North Korean leader Kim Jong Un, was killed on Feb. 13, when Malaysian police say two women smeared super toxic VX nerve agent on his face at Kuala Lumpur International Airport. North Korea, which the United States and South Korea say orchestrated the murder, has denied the victim was Kim Jong Nam. He was carrying a passport under the name of Kim Chol when he was killed. "I again confirm that it is Kim Jong Nam... This is based on a sample taken from his child," Malaysian Deputy Prime Minister Ahmad Zahid Hamidi told reporters. He did not say how Malaysia obtained the DNA sample or from which of Kim Jong Nam's children it came from. Kim Jong Nam had been living in the Chinese territory of Macau with his second wife under Beijing's protection after the family went into exile several years ago. He had spoken out publicly against his family's dynastic control of the isolated, nuclear-armed North Korea. Video footage of a man claiming to be the son of Kim Jong Nam appeared last week, in which he said he was lying low with his mother and sister. An official at South Korea's National Intelligence Service confirmed the man in the video was Kim Han Sol, the 21-year-old son of Kim Jong Nam. The murder has sparked a diplomatic meltdown between two countries with once strong ties. Malaysia refused North Korea's request to release the body without an autopsy and investigation, and then expelled the North Korean ambassador over his remarks questioning the investigations. North Korea then banned nine Malaysians - three diplomats and their six family members - from leaving the country, in what Malaysian Prime Minister Najib Razak described as taking Malaysians "hostage". The Southeast Asian country followed with a tit-for-tat action. Formal negotiations between the two countries began on Monday.
#Malaysia #North Korea #Kim Jong Un #DNA sample #Kim Jong Nam #VX nerve agent
You May Also like: