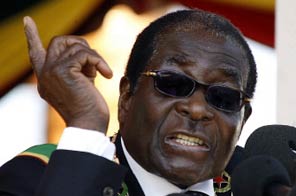 HARARE: President Robert Mugabe has pardoned 1,500 inmates, more than 10 percent of the prison population, as Zimbabwe struggles to provide them with food and water, an official said Wednesday.

Mugabe granted amnesty to 1,544 prisoners, mainly women and juveniles, as well as people with terminal illnesses, said the permanent secretary in the justice ministry David Mangota.

"The Zimbabwe Prison Service has faced challenges in... provision of prisoners' rations, clothing and bedding, toiletries and transport among others," Mangota told the official New Ziana news agency.

"As a short-term relief option... a proposal to have a general amnesty was granted to inmates," he added.

People convicted of offences such as murder, rape or conspiracy against the government would not qualify for the amnesty, Mangota said.

In June, government allowed the International Federation of the Red Cross to bring blankets, food, medicine and other supplies to the prisons.

Amnesty International says that nearly 1,000 of Zimbabwe's 12,900 prisoners died in the first six months of the year in prisons that are overcrowded and filthy.

The Khami maximum security prison in the second city of Bulawayo last month had its water supplies cut off due to unpaid bills.

Dire prison condititions have turned the cells into breeding grounds for cholera, diarrhoea and tuberculosis, compounding the already high HIV rate in a nation where 15.6 percent of adults carry the virus that causes AIDS.