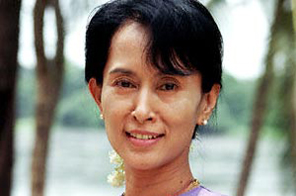 YANGON: The pro-democracy icon was found guilty on August 11 of breaching security laws after an American man swam to her house. She was sentenced to three years' hard labour but junta chief Than Shwe cut the term to 18 months' detention.
Yangon divisional court agreed earlier this month to consider an appeal by her lawyers and was hearing closing submissions from government lawyers and from Suu Kyi's legal team on Friday, her lawyer Nyan Win said.
"We are ready and confident for the appeal hearing," Nyan Win, who is also the spokesman for Suu Kyi's National League for Democracy, told AFP on his way to the court.
Official sources said it was likely that the court would deliver its judgment on the appeal at a later date.
The military regime earlier this week refused to give the 64-year-old Nobel Peace laureate permission to attend Friday's hearing, prompting complaints from her lawyers.
But Myanmar's tightly controlled state media on Thursday defended the decision, saying judicial rules do not require a defendant's presence on appeal.
Suu Kyi was put on trial in May after John Yettaw, an eccentric former US military veteran, swam uninvited to her lakeside mansion and spent two days there.
Yettaw was sentenced to seven years' hard labour at the same trial but the regime freed him last month on humanitarian grounds after a visit by US Senator Jim Webb.
The guilty verdict against Suu Kyi sparked international outrage and the imposition of further sanctions against Myanmar's powerful generals, who have already kept the frail Suu Kyi locked up for 14 of the past 20 years.
Her extended house arrest keeps her off the scene for elections promised by the regime some time in 2010, adding to widespread criticism that the polls are a sham designed to legitimise the junta's grip on power.
The military regime announced late Thursday that it would grant an amnesty to 7,114 prisoners on "humanitarian grounds" but there was no immediate indication whether they included political detainees.

#Myanmar court hears Suu Kyi appeal
You May Also like: