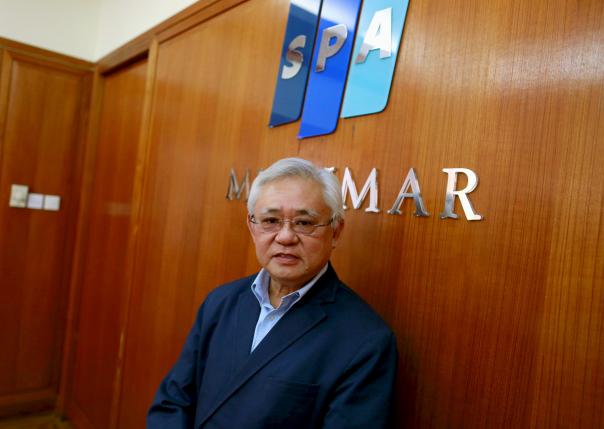 Yoma Chairman Serge Pun poses for a photograph in his office in Yangon, Myanmar March 24, 2014. REUTERS
YANGON: Scaffolding around the 139-year old Burma Railway Headquarters, a red-brick colonial relic at the centre of a half billion dollar property development in central Yangon, hasn't seen much action since the project was announced four years ago. Serge Pun, the 63-year-old project developer and one of Myanmar's richest men, says his Landmark development - which includes office, residential and hotel space - has been strangled by red tape and costly delays all because of his adherence to clean business. It's a frustrating contrast to the luxury and high-end property boom in other parts of the Myanmar's commercial capital. "It has been a very long and arduous red tape road," Pun said in an interview. "Good governance always has a price to pay and the price we are paying is a delay." Companies and international agencies have long identified corruption and a lack of transparency as major obstacles to doing business in Myanmar. Pun's grievances underscore the challenges the newly-elected National League for Democracy (NLD) faces as it seeks global investment for urgent development needs. And despite his own clean credentials, Myanmar's complicated business environment means Pun has at times dealt with internationally blacklisted entities with key market positions. Landmark, a 10 acre development, was first announced in 2012 and is one of the country's most high-profile international investments. Despite prominent backers - including the International Finance Corporation, a branch of the World Bank that finances private ventures; Asia Development Bank and Mitsubishi Corporation - the project hasn't yet broken ground. The latest deadline for lease extensions from the Ministry of Rail Transport, which owns the land, was missed at the end of March. A senior ministry official said refurbishment of the old building is in progress but needed to be carried out "without affecting the heritage values." The official didn't comment on the status of the lease extension or explain why it had yet to be granted. Vikram Kumar, IFC's Myanmar manager, said the lease extension delays significantly impact the project's financial viability for both debt and equity investors. GO-TO PARTNER For investors keen to break into the frontier market, Pun serves as a go-to partner to help navigate local complexities, notably international sanctions still in place on many Myanmar nationals and businesses. Pun built his conglomerate, Yoma Strategic Holdings (YOMA.SI), from scratch and his business empire includes real estate, banking, aviation and cars. Over three decades, he has become one of Asia's richest men while cultivating a reputation as "Mr Clean" in a country long known as anything but. Neither he nor his companies have been subject to international sanctions. Companies from American fast-food chain KFC to Indonesian healthcare operator Lippo Group have partnered with him. However, the business reality in Myanmar means some otherwise straightforward business ventures run through blacklisted companies. One of KFC's Myanmar outlets, for example, is at the new Yangon airport terminal, which was built and run by businessman Steven Law, who is on the US sanctions list. Pun said that the deal doesn't violate sanctions because it was done through Yoma, not KFC, and that it complies with Yoma's code of conduct. US-based Yum! Brands (YUM.N), which owns KFC, did not respond to emailed requests for comment. US Treasury said it doesn't comment on the "existence or possibility of sanctions violations." The NLD is yet to release a plan addressing remaining sanctions, but recently slapped curbs on the value of gifts officials can accept, a small step to fulfilling its pledge to eliminate graft. For now, US sanctions still create headaches, often indirectly tying up Myanmar-related bank transfers, even if they don't involve blacklisted entities. "When you actually try to do business, everybody doesn’t understand whether you are a jade miner or not - they just say it is too troublesome to transact your fund remittance," Pun said.
#United States #myanmar #Serge Pun
You May Also like: