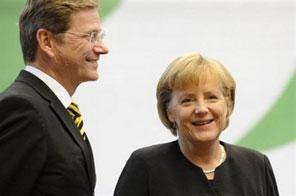 BERLIN: Germany's newly elected coalition got set for government on Saturday after adopting a common programme in a late-night meeting aimed at guiding the country out of its worst recession since World War II.
Chancellor Angela Merkel won a second term in elections on September 27, managing also to ditch her previous coalition partners, the centre-left Social Democrats, in favour of the pro-business Free Democrats (FDP).
The challenges facing Merkel, 55, over the next four years are immense.
Germany's export-dependent economy, Europe's largest, has been hit harder than most by the global slowdown, triggering its worst recession since the foundation of the postwar Federal Republic in 1949.
Economic output is set to fall around five percent this year, but is on course to recover slightly in 2010, with gross domestic product (GDP) predicted by the government to grow by around 1.2 percent.
But the recession has left Germany's public finances in tatters, with Merkel rolling out two stimulus packages worth around 80 billion euros (120 billion dollars), tax receipts falling and social security spending rising.
As a result, the government is on course to spend 50 billion euros (75 billion dollars) more than it takes in this year.
It already spends tens of billions in interest payments on its debts each year, and will be forced to borrow hundreds of billions of euros (dollars) more over the next few years, putting it in breach of EU deficit rules.
This makes the new government's promises to slash taxes hard to meet, making this the thorniest issue in the three-week-long coalition talks.
The neo-liberal FDP, led by Guido Westerwelle, promised in its election campaign 35 billion euros worth of tax cuts and to take the axe to government spending.
But Merkel promised lighter tax cuts of 15 billion euros, and is wary of stoking protests from Germany's powerful unions.
The two parties were due to give details at around 10:30 am (0830) on what compromise they have reached.
In other areas, however, agreement came more easily.
According to leaked details, they include scrapping the 2000 decision to abandon nuclear power by around 2020, by extending the life of some reactors, much to the annoyance of environmentalists.
They also agreed on the broad outlines of reforms to the country's creaking health care system, although the details will be left to a new committee to work out, and no changes will happen before 2011.
In foreign policy, they want to press for the Afghan government to take on more responsibilities so that Germany's 4,200 troops, who are part of the NATO-led mission, can come home.
The FDP succeeded in softening somewhat Merkel's position on Turkish membership of the European Union, meaning that the door will remain open, while stressing that Turkish membership is neither automatic nor guaranteed.
After the far-reaching changes by Merkel's predecessor Gerhard Schroeder, the FDP failed to convince her party to go further and make it easier for firms to hire and fire workers, however.

#New German coalition set for govt
You May Also like: