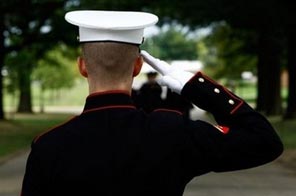 A member of an honor guard team salutes during a funeral at Arlington National Cemetery in Arlington, Virginia. A powerful US senator warned against sending more American troops to Afghanistan, signalling growing skepticism over the war within President Barack Obama's own party. Source: AFP

WASHINGTON: A powerful US senator warned against sending more American troops to Afghanistan, signalling growing skepticism over the war within President Barack Obama's own party.

Carl Levin, the influential chairman of the Senate Armed Services Committee, was the latest top Democrat in Congress to voice opposition to a fresh military build-up in Afghanistan, as the White House weighs deploying yet more troop combat troops.

But his comments came as the Pentagon confirmed it intended to send more troops to Afghanistan to tackle a growing threat from improvised explosive devices.

Levin called for redoubling efforts to bolster Afghan security forces before any further expansion in US troops, which are set to reach 68,000 by the end of the year.

"We should increase and accelerate our efforts to support the Afghan security forces in their efforts to become self-sufficient in delivering security to their nation -- before we consider whether to increase US combat forces above the levels already planned for the next few months," said Levin, who returned last week from a trip to Afghanistan.

Levin's comments came a day after a blunt warning from Obama's top Democratic ally in the House of Representatives, speaker Nancy Pelosi, who suggested lawmakers and American voters are growing weary of a war that has dragged on for eight years.

"I don't think there's a great deal of support for sending more troops to Afghanistan in the country or in the Congress," Pelosi told reporters.

The White House meanwhile said there would be no decision on the sensitive issue of more troops for "many, many weeks," avoiding a confrontation with fellow Democrats for the moment.

"I will reiterate again that there hasn't been a plan for and there isn't an imminent decision on increased resources to Afghanistan," White House spokesman Robert Gibbs told reporters.

However, the Pentagon said Friday that a deployment of forces to counter the growing threat posed by improvised explosive devices (IEDs) was likely.

"We see a growing IED threat in Afghanistan and therefore the secretary is determined to dedicate more resources there to protect against that growing threat," Pentagon spokesman Geoff Morrell told AFP.

"We are trying to figure out how we get these capabilities over there."

Morrell said it was not yet certain whether the deployment would affect the overall number of US troops in Afghanistan.

General Stanley McChrystal, the commander of US and NATO forces in Afghanistan, recently delivered a classified assessment of war strategy and is widely expected to request more US forces to try to turn the tide against the Taliban and allied insurgents.

While military commanders appear to be preparing the ground for a troop request, casualties among NATO-led troops are mounting and recent polls show US public opinion turning against the war.

Disputes over alleged vote-rigging in Afghanistan's election have raised fresh doubts in the West about the legitimacy of the corruption-plagued Kabul government and the course of the war launched in the aftermath of the September 11, 2001 attacks.

Obama faces less resistance on Afghanistan from his customary opponents in the Republican party, who are generally more hawkish on the war and more willing to commit more troops.

While some Republicans have called on Obama to publicly defend the US mission in a more forceful way, Senator John McCain rejected Levin's argument that more Afghan security forces could prevail without added US troops.

"Obviously we need to increase the number of the Afghan military," McCain told AFP.

But he said experience in Iraq showed such an effort had to be accompanied by an increase in US troops as well.

"We've seen this movie before, it didn't work in Iraq and it won't work in Afghanistan."

Levin argued for first increasing the size of the Afghan army and police "much faster than presently planned" and providing them with more trainers and equipment at an accelerated pace.

And he called for wooing elements of the insurgency to side with the central government "as we did in Iraq."

Levin proposed raising that number to 240,000 by 2012, one year earlier than planned by McChrystal. He also proposed increasing the number of Afghan soldiers to 160,000 by 2012.

"We need to obtain on an urgent basis a list of the basic equipment needs of the Afghan forces and a list of how those needs could be met in a major program to transfer equipment leaving Iraq," Levin said.

US officials have said dramatically expanding the Afghan security forces would require more troops to train soldiers and police and a bigger financial commitment from NATO states.

#Obama faces Congress in Afghan war
You May Also like: