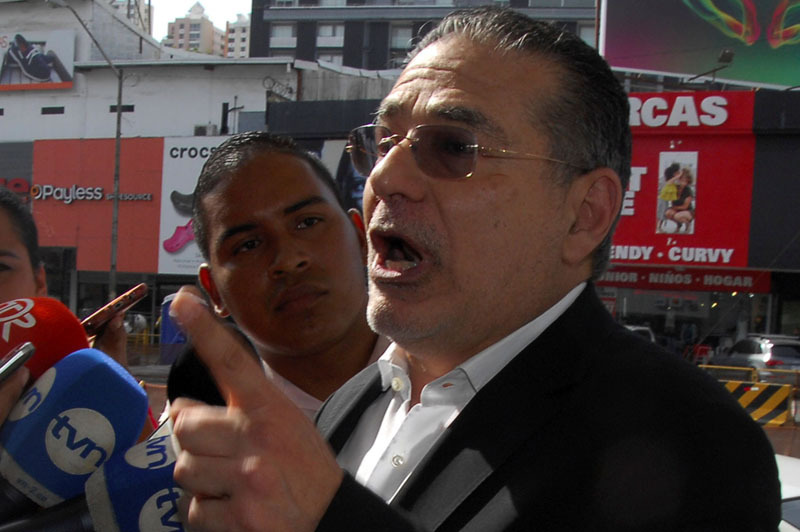 Ramon Fonseca, founding partner of law firm Mossack Fonseca, gestures as he talks to the media as he arrives at the Public Ministry office for the Odebrecht corruption case in Panama City, Panama, on February 9, 2017. Photo: Reuters
PANAMA CITY:  The two founders of Panamanian law firm Mossack Fonseca were arrested on Saturday, the attorney general's office said, after both were indicted on charges of money-laundering in a case allegedly tied to a wide-ranging corruption scandal in Brazil.
Firm founders Jurgen Mossack and Ramon Fonseca were detained because of the risk they might try to flee the country. Attorney General Kenia Porcell told reporters on Saturday that the information collected so far "allegedly identifies the Panamanian firm as a criminal organization that is dedicated to hiding assets or money from suspicious origins." Porcell said the one-year investigation that led to the arrests has been aided by prosecutors in Brazil, Peru, Ecuador, Colombia, Switzerland and the United States. Mossack Fonseca is also at the center of a separate case known as the Panama Papers, which involved millions of documents stolen from the firm and leaked to the media in April 2016. The fallout from the leaks provoked a global scandal after numerous documents detailed how the rich and powerful used offshore corporations to hide money and potentially evade taxes. On Thursday, prosecutors raided Mossack Fonseca offices seeking evidence, and the homes of the firm's founders were searched on Friday. Fonseca, a former presidential adviser in Panama, has previously denied that the firm had any connection to Brazilian engineering company Odebrecht, which has admitted to bribing officials in Panama and other countries to obtain government contracts in the region between 2010 and 2014. "This investigation in principle is not related to Odebrecht, but to the Lava Jato case," Porcell said, referring to the probe centered on Brazilian state-run oil company Petrobras. Fonseca has also denied any relationship with the Lava Jato case. Following the arrests, Mossack Fonseca defense lawyer Elias Solano called the accusations against the firm's founders "weak" and said he would challenge the evidence presented against his clients. A source in the prosecutors office told Reuters that an unidentified third lawyer with the firm had also been arrested, while a fourth faces an arrest warrant, but her whereabouts are unknown. The two additional lawyers were not named by Porcell.
#Panama papers #Mossack Fonseca #Jurgen Mossack #Ramon Fonseca #Kenia Porcell
You May Also like: