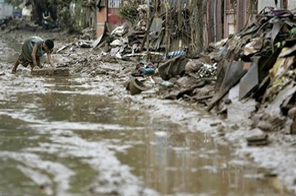 MANILA: The death toll from two weeks of unprecedented storms across the northern Philippines soared past 450 on Friday, after landslides killed dozens of people and floods inundated many towns.
As rain relentlessly pounded the main island of Luzon, mountainous regions were bracing for more landslides while communities across the central plains were enduring torrents of water up to two storeys high.
"The rains in this area are unprecedented," the executive officer of the National Disaster Coordinating Council, Glen Rabonza, told AFP.
"We are stretched, no doubt, but we are responding in the best way we can."
The crisis showed no signs of easing as tropical storm Parma, responsible for the past week of rains, continued to hover just off Luzon.
In Benguet province, 75 people were confirmed killed after landslides struck on Thursday night and Friday morning in five towns, provincial police chief Superintendent Loreto Espinili said.
Other officials said the death toll across Benguet alone would be over 100.
"The damage in the region is massive. We have several reports of landslides across the region," Benguet civil defence chief Olive Luces said.
In the mountain resort city of Baguio, 17 people were killed as landslides buried entire houses, city administrator and civil defence official Peter Fianza said.
A landslide also left five dead and 32 missing in Mountain Province, according to provincial governor Maximo Dalog.
Meanwhile, thousands of people were stranded on rooftops amid worsening floods in the farming region of Pangasinan province to the southwest of the provinces where the landslides occurred.
Days of rain from Parma had forced authorities to open the gates on five dams, sending water cascading through dozens of towns in the province, which has a population of 2.5 million people.
"A lot of places cannot be reached by our rubber boats because the current is too strong due to the waters released by San Roque dam," Pangasinan governor Amado Espino said.
"The dam is supposed to be for flood control but now it is so filled it is like it is not there. The water just rushes right through from the mountains to Pangasinan."
Rabonza said about 60 percent of Pangasinan, including about 30 towns, were flooded with waters reaching as high as the second storeys of buildings.
Desperate local officials made urgent pleas for rubber boats and helicopters to rescue those stranded by the floods.
The mayor of Alcala town in Pangasinan, Manuel Collado, said his residents were in dire need of quick help.
"There are still stranded people. We have village officials trying to rescue them using bamboo rafts," Collado said in a television interview.
"We called the national government for help but they said all their rubber boats are already out so we are building these bamboo rafts in the meantime."
Even heavy trucks that were sent to rescue people could not make it through the rising floodwaters.
Parma has been hanging over the northern Philippines since initially hitting as a typhoon on October 3.
It has claimed 25 lives over the past week, the civil defence office said on Friday. The people killed in the landslides were not yet included in that toll, Rabonza said.
Parma hit the Philippines exactly one week after tropical storm Ketsana dumped the heaviest rains in more than four decades on the nation's capital, Manila, killing at least 337 people.
The government has been completely overwhelmed by the crisis, which has forced hundreds of thousands of people in Manila and other parts of Luzon into makeshift evacuation centres after losing their homes to the floods.