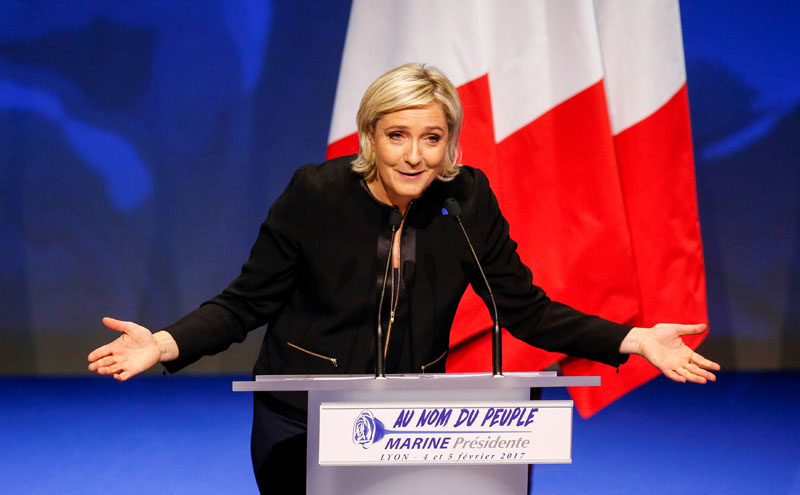 Marine Le Pen, French National Front (FN) political party leader and candidate for the French 2017 presidential election, attends the 2-day FN political rally to launch the presidential campaign in Lyon, France, on February 5, 2017. Photo: Reuters
PARIS:  Far-right leader Marine Le Pen looks set to win the first round of France's presidential election in April, according to a new survey issued on Thursday, with other polls indicating she will lose the runoff to centrist Emmanuel Macron. Harris Interactive said a poll of voting intentions for the April 23 first round indicated that Le Pen, who heads the anti-immigrant and anti-EU National Front, would get 24 percent, with Macron taking 21 percent. Francois Fillon, a conservative who was favourite to win election only two weeks ago but has seen his campaign damaged by scandal, trailed on 19 percent. Only the top two candidates go through to the May 7 runoff. The poll assumed, however, that centrist Francois Bayrou would run and would pick up 5 percent in the first round. Bayrou has not yet officially declared himself a candidate, though. If he does not run, his voters are likely to support either Macron or Fillon. Two polls on Wednesday night gave Le Pen a similar advantage over Macron in the first round, and indicated that the former investment banker would beat her in the runoff by around 63 percent to 37.
#Marine Le Pen #Emmanuel Macron #French presidential election #Francois Fillon #Anti-EU National Front
You May Also like: