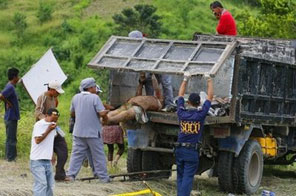 Workers load into a truck dead bodies, victims of massacre after gunmen shot at least 46 people in Ampatuan town, Maguindanao province, on November 24. Philippine police have named a political ally of President Gloria Arroyo as the prime suspect in the election-linked massacre. Source: AFP

MANILA: Philippine police on Wednesday named a political ally of President Gloria Arroyo as the prime suspect in an election-linked massacre of 46 people.
"According to the initial reports, those who were abducted and murdered at Saniag were initially stopped by a group led by the mayor of Datu Unsay," national police spokesman Chief Superintendent Leonardo Espina said.
The mayor of Datu Unsay is Andal Ampatuan Jnr, a member of Arroyo's ruling Lakas Kampi CMD coalition and son of an extremely powerful regional politician who has ensured local support for the president in previous elections.
The military had previously named bodyguards hired by the Ampatuan clan as the suspected gunmen in Monday's massacre in which relatives and aides of a rival politician, plus a group of journalists, were abducted and shot dead.
However, the police spokesman's comments were the first time Ampatuan Jr has been specifically named as a top suspect in the massacre, which took place in a village on the outskirts of a town that bears the clan's name.
The Ampatuan son was being groomed to succeed his father, the three-term governor of Maguindanao province on Mindanao island.
The 46 victims included the wife and relatives of rival Maguindanao politician Esmael Mangudadatu.
The victims were abducted as they were travelling in a six-vehicle convoy to nominate Mangudadatu as the opposition candidate for governor in next year's elections.

#Prez's ally top suspect in massacre
You May Also like: