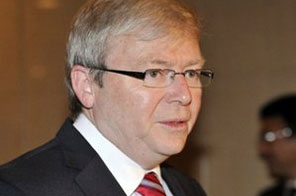 Australia's Prime Minister Kevin Rudd is set to meet Britain's Prince William when the second in line to the British throne visits Sydney this week, the Australian leader and avowed republican has said. Source: AFP

The 27-year-old, who is second in line to the throne, arrives in Sydney from New Zealand on Tuesday for a three-day tour -- his first since he came to Australia as an infant with his parents in 1983.

"The prince and I are visiting a youth homeless centre together later this week," Rudd told reporters.

"I look forward to having a conversation with him."

During his tour, Prince William is set to visit a deprived Aboriginal neighbourhood in inner Sydney and bushfire-ravaged zones outside Melbourne.

The young prince is expected to be warmly received in Australia, a former penal colony which remains a constitutional monarchy with the British sovereign as its head of state.

The centre-left Rudd has said he supports a republic but that scrapping the monarchy is not a top priority for his government.

Ahead of meeting Queen Elizabeth last year, Rudd told the BBC that "Her Majesty is well loved in Australia and Australia will become a republic and we'll have a referendum in due season".

In 1999, voters rejected a referendum promoting a model for an Australian republic.

#Prince William to meet Australian PM
You May Also like: