Some progress in Geneva talks on Aleppo ceasefire: US 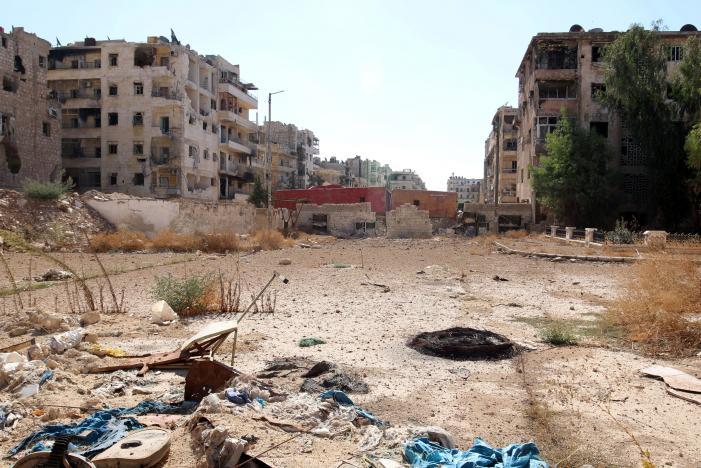 A view shows what is believed to be one of the roads that people would have to use to access one of the safe exit points opened for people wishing to leave rebel-held areas, in Aleppo's Bustan al-Qasr, Syria October 20, 2016. REUTERS
WASHINGTON: There has been some progress in Geneva talks this week among the United States, Russia and other nations trying to achieve a ceasefire agreement in Aleppo, the US State Department said on Friday. The crux of the discussions, according to a diplomat briefed on them, was on whether there was a way to separate out al Qaeda-linked fighters in eastern Aleppo, thereby depriving Syrian and Russian forces of their main targets in the city. Rebels in Aleppo opposed to Syrian President Bashar al-Assad's government are fighting to defend themselves against the firepower of the Syrian army, supported by Iranian-backed militias and Russian air power. "There has been some progress," State Department spokesman John Kirby said of the Geneva talks. Kirby told reporters that he did not want to be unduly optimistic but hoped unresolved issues would be settled in the coming days. "There are still gaps." Russia, which last year intervened militarily in the civil war to bolster Assad, is mainly concerned with going after militants from Jabhat Fateh al-Sham, formerly known as the Nusra Front. The United States regards it as al Qaeda's Syrian branch and has formally designated it as a terrorist group. The diplomat, who spoke on condition of anonymity, said that the United States' main concern was to minimize civilian suffering and preserve a measure of local autonomy in eastern Aleppo rather than seeing the Syrian government reenter in force and impose its will. The diplomat was also very cautious about whether it might be possible to reach any agreement over Aleppo, which is currently enjoying a slight respite. Syria's military and Russia's air force halted their bombardment of rebel-held eastern Aleppo on Friday, a monitoring group said, on the second of four consecutive daytime unilateral ceasefires in the city that have been rejected by insurgents. The diplomat said it seemed inevitable that the rebels in eastern Aleppo would succumb to the offensive. "The Russians insist all they care about is Nusra, so people are trying to figure out how to get Nusra out of Aleppo so the Russians don't bomb (the daylights) out of Aleppo," he said. "Nobody is sanguine" about getting an agreement, he said. "This is not done."
#United States #ceasefire #Aleppo #Geneva talks #in Geneva
You May Also like: