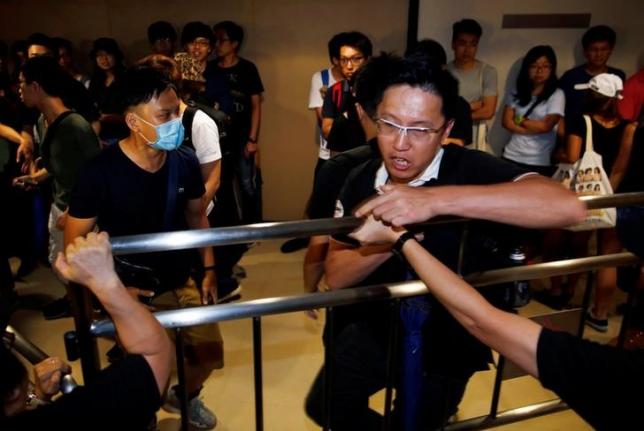 Supporters of Hong Kong Indigenous member Edward Leung try to break into the venue during a briefing for qualified candidates running for the Legislative Council election in Hong Kong, China, August 2, 2016. REUTERS

HONG KONG: Dozens of masked demonstrators tried to force their way into an electoral meeting in Hong Kong on Tuesday to protest against a new bar on anyone running for the legislature who refuses to declare the territory an "inalienable" part of China.

They were among hundreds of protesters gathered outside the meeting, a briefing for prospective parliamentarians, shouting for Hong Kong's independence.

Inside the venue, some candidates who had been approved to run for election protested the decision to disqualify others.

"Some participants shouted and stormed the stage, causing chaos and seriously disrupting the order of the event," the government said in a statement late on Tuesday.

Members of the League of Social Democrats and People Power tried several times to charge the stage and take the microphone before being pushed back by security, forcing the meeting to be suspended at least three times.

Politicians from other pro-democracy parties chanted: "No more political elimination!" and "Defend a fair election!"

The Electoral Affairs Commission (EAC) said last month that potential candidates for the September Legislative Council election must sign an additional "confirmation form" declaring Hong Kong an inalienable part of China and acknowledging that advocating independence could disqualify them from the election.

Hong Kong has greater freedoms than mainland China and separate laws that were guaranteed for 50 years as part of a "one country, two systems" framework negotiated with the British when they handed back their former colony.

But there has been political unrest in recent years centring on Beijing's refusal to allow fully democratic elections and its perceived meddling in the special administrative region.

Beijing's top official in Hong Kong came out in support of the EAC's new form while three Hong Kong politicians filed a request for an urgent judicial review.

The government said 154 nomination forms were received during the nomination period ended July 29. Of those, five were ruled invalid, while one was withdrawn.

Activists have posted personal attacks on some of the EAC officers responsible for the decision, actions that the Hong Kong government has condemned.

Edward Leung Tin-kei, who was rejected as a candidate by the EAC on Tuesday, responded by saying the city was ruled by a "dictatorship", local broadcaster RTHK reported.

Leung, a leader of the group Hong Kong Indigenous, was one of the first street activists to move into mainstream politics when he won an unexpected 15 percent of the vote in a February legislative by-election.

He had signed the EAC's confirmation form, saying his top priority was to get elected.

#Hong Kong #protesters #Hong Kong election
You May Also like: