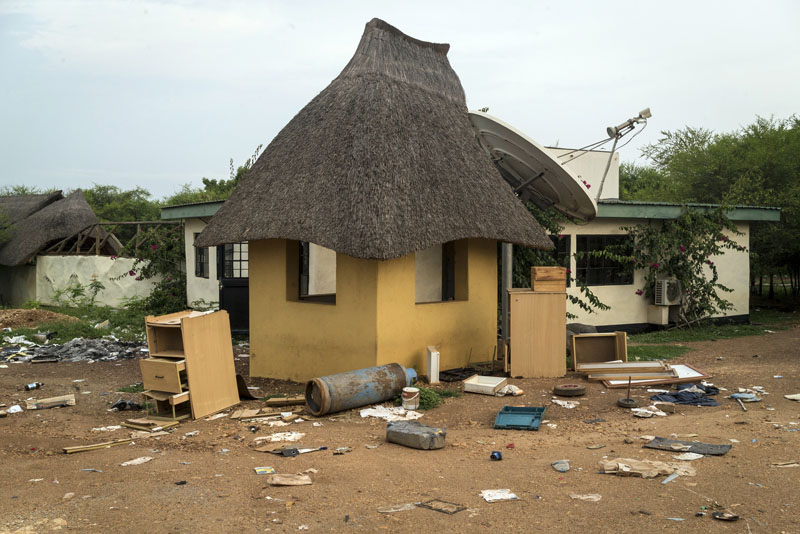 Debris lies in the Terrain compound after it was looted the previous month in the capital Juba, South Sudan, on Wednesday, August 3, 2016. Photo: Adriane Ohanesian via AP
"Everyone refused to go. Ethiopia, China, and Nepal. All refused to go," he said. Eventually, South Sudanese security forces entered the Terrain and rescued all but three Western women and around 16 Terrain staff. No one else was sent that night to find them. The UN timeline said a patrol would go in the morning, but this "was cancelled due to priority." A private security firm rescued the three Western women the staffers the next morning. "The peacekeepers did not venture out of the bases to protect civilians under imminent threat," Human Rights Watch said Monday in a report on abuses throughout Juba. Asked why UN peacekeepers didn't respond to repeated pleas for help, the UN said it is investigating. "Obviously, we regret the loss of life and the violence that the people who were in Hotel Terrain endured, and we take this incident very seriously," the deputy spokesman for the UN secretary-general, Farhan Haq, told reporters Monday. "As you're aware, we have called on the national authorities to investigate this incident thoroughly and to bring the perpetrators to justice." The US Embassy, which also received requests for help during the attack, "was not in a position to intervene," State Department spokeswoman Elizabeth Trudeau told reporters Monday. She said the US ambassador instead contacted local government officials, and she noted that the Terrain area was controlled by South Sudanese government forces at the time. Samantha Power, the US ambassador to the United Nations, said that "during the fighting throughout the city, the US Embassy in South Sudan responded to distress calls from the compound and urgently contacted South Sudanese government officials, who sent a response force to the site to stop the attack." "We are deeply concerned that United Nations peacekeepers were apparently either incapable of or unwilling to respond to calls for help. We have requested and are awaiting the outcome of an investigation by the United Nations and demand swift corrective action in the event that these allegations are substantiated," she said in a statement. The assault at the Terrain pierced a feeling of security among some foreigners who had assumed that they would be protected by their governments or the hundreds of UN peacekeepers almost next door. One of the women gang-raped said security advisers from an aid organisation living in the compound told residents repeatedly that they were safe because foreigners would not be targeted. She said: "This sentence, 'We are not targeted,' I heard half an hour before they assaulted us."
#Rape #UN mission #South Sudan #UN peacekeepers #Hotel Rampage #South Sudan sexual assault #Quick Reaction Force
You May Also like: