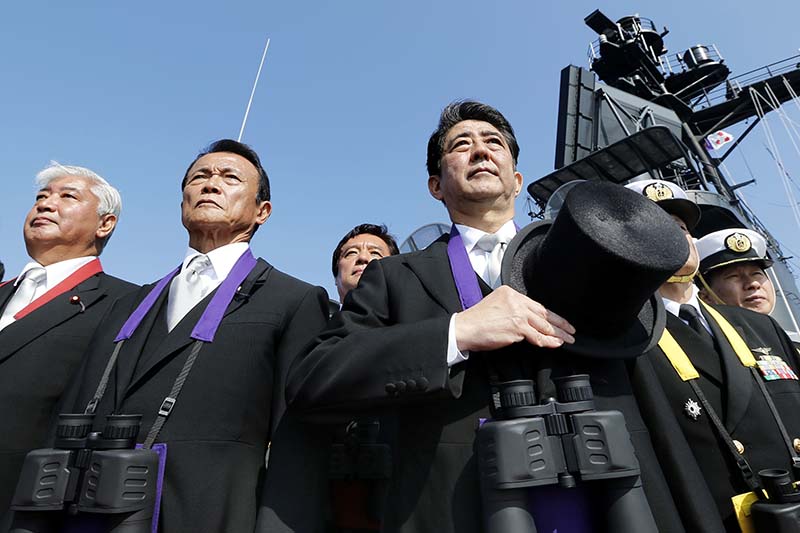 File-Japanese Prime Minister Shinzo Abe (centre), stands with Deputy Prime Minister and Finance Minister Taro Aso (second from left) and then Defense Minister Gen Nakatani (left) during the official triennial Maritime Self-Defense Force fleet review aboard the JMSDF escort ship Kurama in the waters off Sagami Bay, south of Tokyo, Japan on October 18, 2015. Photo: Kyodo News via AP
TOKYO: Japan's ruling party approved a change in party rules Sunday that could pave the way for Japanese Prime Minister Shinzo Abe to become the country's longest-serving leader in the post-World War II era. It is a remarkable turnaround for Abe, who lasted only a year during an earlier stint as prime minister, and in a country that had six prime ministers in the six years before Abe returned to office in December 2012. Analysts say that Japan's 62-year-old leader learned from his first term in office, when he focused on divisive issues such as constitutional revision and patriotic education that contributed to his early downfall. This time, he has made an expansionary economic policy with a catchy name, "Abenomics," front and centre at election time. "The interesting thing is that formerly Abe did not seem to be interested in economic policy," said Yu Uchiyama, a professor of politics at Tokyo University. "Abe was a very conservative politician, and he was interested in a more right-wing agenda like constitutional amendment. But right after he got power for the second time, he did not put forth such a right-wing agenda. Instead he introduced and emphasised the economic issue." That doesn't mean Abe has given up on goals such as revising the constitution, which was drafted by a US-led occupation force after World War II. However, Abe needs to win over a reluctant public — any amendment requires approval by two-thirds of the legislature and a national referendum — and that will take time. His Liberal-Democratic Party, at an annual convention Sunday, rubber stamped a decision by its leaders last fall to allow the head of the party to run for a third 3-year term, rather than be limited to two. In Japan's parliamentary system, the ruling party leader generally becomes the prime minister. The change would allow Abe to stay until 2021, if he can maintain the support of his party and voters, rather than step down in September 2018. Abe, now in his fifth year in office, is Japan's sixth longest serving prime minister. The record-holder is Eisaku Sato, who led the country for more than seven years from 1964 to 1972. He is also the brother of Abe's grandfather, Nobusuke Kishi, who was prime minister from 1957 to 1960. If Abe can hold on, he would surpass Sato in August 2020. Uchiyama said that Abe has maintained his hold on power in part by taking advantage of electoral and administrative reforms that strengthened the prime minister's control of both his party and the bureaucracy. Jeff Kingston, a Japan expert at Temple University's Japan campus in Tokyo, called Abe the most powerful prime minister in the postwar era. "There has been an incredible concentration and centralisation of power in the prime minister's office under Abe, unlike his predecessors, where power was widely distributed and the prime minister was one among many," he said. Still, given public opinion, Kingston gave Abe only a 50-50 chance of achieving constitutional revision: "Polls suggest he has got a long battle to get the public with him." A third term would also give Abe more time to try to resolve a thorny territorial dispute with Russia that has kept the two countries from signing a peace treaty to end World War II hostilities.
#Japan #Japanese Prime Minister Shinzo Abe #Abenomics #Liberal Democratic Party #Longest ruling party #Japan’s longest ruling party #post-World War II era
You May Also like: