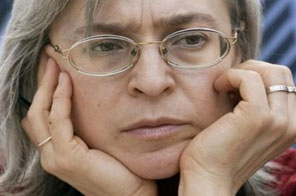 Russian journalist Anna Politkovskaya at a 2005 book fair in Leipzig, Germany. Russia's supreme court has annulled innocent verdicts handed in February to all suspects in the trial in the murder of the investigative journalist. Source: AFP

MOSCOW: Russia's supreme court on Thursday annulled innocent verdicts handed in February to all suspects in the murder of investigative journalist Anna Politkovskaya and ordered a new trial.
"The supreme court has annulled the innocent verdict on the case of the murder of Anna Politkovskaya. The case will be examined again with new jurors," supreme court spokesman Pavel Odintsov told AFP.
A jury in February acquitted four men, none of whom had in the first place been charged with shooting dead the reporter nor with ordering the apparent contract killing in her Moscow apartment building on October 7, 2006.
Rights groups have long criticised Russia's failure to bring to justice the killers of Politkovskaya, who had been highly critical of Russia's strongman Vladimir Putin, who was president at the time and is now prime minister.
Three of the suspects had been charged with assisting in the murder while another was accused of extortion in another aspect of the case.
A lawyer for the Politkovskaya family, Anna Stavitskaya, said the family did not support the annulment of the verdicts.
"They were completely in agreement with the acquittal verdicts, we did not regret this and we think there is no foundation for their annulment," she told the RIA Novosti news agency.
Of the suspects, Chechen brothers Dzhabrail and Ibragim Makhmudov had been accused of driving the killer to the scene of the murder of the Kremlin critic.
Sergei Khadzhikurbanov, a former police investigator had been charged with providing logistical assistance for the murder.
Pavel Ryaguzov, a former agent of the FSB security service, was not directly accused of being part of the murder but of extortion in another aspect of the case.
Despite lasting three months, the original trial failed to shed any significant light on the circumstances of the killing.
Politkovskaya wrote dozens of articles for her Novaya Gazeta newspaper and a book called "Putin's Russia," accusing Putin of using the Chechen conflict to strangle democracy and detailing horrific rights abuses in Chechnya.
After her murder, Putin called for Politkovskaya's killers to be punished but also described as "extremely insignificant" her ability to influence political life in Russia.

#Russia annuls journo verdicts: court
You May Also like: