Russia not for missiles near Poland 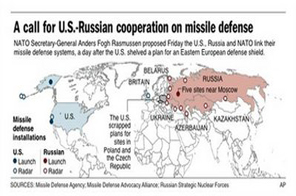 MOSCOW: Russia will scrap a plan to deploy missiles near Poland because the U.S. no longer wants to place a missile-defense system in Eastern Europe, a Russian deputy defense minister said Saturday.
Vladimir Popovkin told Ekho Moskvy radio that Obama's move has made the deployment of Iskander short-range missiles in the Kaliningrad region unnecessary.
"Reason has prevailed over ambitions," Popovkin said. "Naturally, we will cancel countermeasures which Russia has planned in response."
Popovkin's statement was the most explicit declaration yet of Russia's intention to scrap the plan after President Barack Obama's decision, announced Thursday, to halt Eastern European missile defense.
Popovkin later added, however, that the final decision on the subject can only be made by Russian President Dmitry Medvedev, Russian news agencies reported. Medvedev hasn't yet spoken on the issue.
Russia staunchly opposed the plan by the former administration of George W. Bush to deploy 10 missile interceptors in Poland and a related radar in the Czech Republic and said if the project went ahead it would respond by deploying the Iskander missiles in its westernmost Baltic Sea region.
Obama's decision to scrap the plan was based largely on a new U.S. intelligence assessment that Iran's effort to build a nuclear-capable long-range missile would take three to five years longer than originally thought, U.S. officials said. The new U.S. missile-defense plan would rely on a network of sensors and interceptor missiles based at sea, on land and in the air as a bulwark against Iranian short- and medium-range missiles.
Medvedev hailed Obama's decision as a "responsible move," but Russian officials have given no indication yet that Moscow could edge closer to the U.S. stance on Iran. Washington is counting on Moscow to help raise pressure on Tehran over its nuclear program.
Obama is to meet with Medvedev at the United Nations and the Group of 20 economic summit in the coming week.
Medvedev's predecessor and mentor, Vladimir Putin, who is widely believed to be continuing to call the shots as Russia's prime minister, also praised Obama's decision but challenged the U.S. to do more by canceling Cold War-era restrictions on trade with Russia and facilitating Moscow's entry into the World Trade Organization.
It has remained unclear what behind-the-scenes talks went on between Moscow and Washington before Obama's announcement. Russian officials said they had made no concessions in return.
Medvedev foreign policy adviser Sergei Prikhodko said Friday the move would require the Kremlin to "attentively consider new possibilities opening up for cooperation and interaction," but gave no indication what compromises Moscow could make.

#Russia not to deploy missiles near Poland
You May Also like: