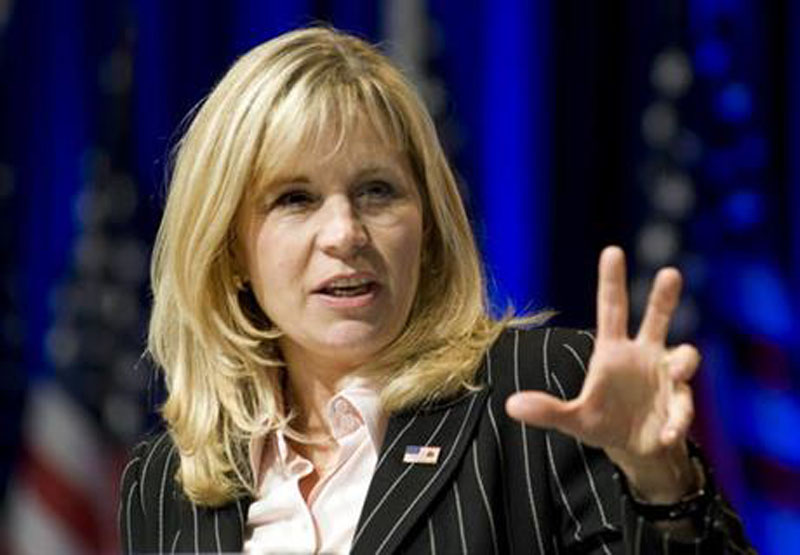 File - Liz Cheney addresses the Conservative Political Action Conference in Washington, on February 18, 2010. Photo: AP
CHEYENNE: Ryan Greene has won the Democratic nomination for Wyoming's US House seat and will face Republican Liz Cheney in the general election. Greene is a manager in his family's oilfield services company in Rock Springs. He is a political newcomer but says he's held a variety of jobs in the oil patch. He beat Charlie Hardy, a retired Roman Catholic priest who lost to incumbent Republican Sen Mike Enzi in 2014. Greene says Wyoming's next congressman will need to be realistic and willing to work with both Democrats and Republicans. He says Americans are fed up with grandstanding and want leaders willing to work for the people, not a political party. Rep Cynthia Lummis isn't seeking a fifth term after serving four terms, leaving Wyoming's lone seat in the US House up for grabs. In the race for the GOP nomination, Cheney beat seven challengers for a chance at the job her father, former Vice President Dick Cheney, first won 40 years ago. Her campaign focused on national security and rolling back federal regulations affecting Wyoming's beleaguered coal industry. She was by far the best-funded candidate and brought in more than $1.5 million through July. Weeks before the primary, Cheney had almost 10 times more money than her next three opponents combined. Her competitors included state Rep. Tim Stubson and state Sen Leland Christensen. And Cheney, of course, also has top name recognition. She has used her contacts to raise money from prominent Republicans nationwide. Registered Republicans outnumber registered Democrats in Wyoming more than 3-to-1, so the eight-way GOP primary likely will prove the most important vote in determining who will fill the seat. As of August 1, there were roughly 143,000 GOP voters registered compared to some 42,000 Democrats, according to the state Bureau of Elections. Tuesday's results show Liz Cheney has rebounded from her first, unsuccessful congressional run. In the last election cycle, Cheney mounted an audacious challenge to incumbent Enzi. Many prominent Wyoming Republicans accused her of being a "carpetbagger" for running against the state's senior senator when she had only recently moved to Wyoming from Virginia. She quickly dropped out of the race. Now more seasoned, Cheney is undertaking the considerably less daunting task of running for an open seat. Cheney, a former Fox News commentator and State Department official, is emphasizing in her current campaign that she wants to represent Wyoming to fight against Washington overreach, particularly against federal regulation of the state's sagging coal industry. And echoing her father's criticism, she's been vocal in attacking President Barack Obama for actions she says have undermined national security. Although Cheney emphasizes her family has deep roots in the "Cowboy State," those roots still aren't deep enough for Jason Gilbert, a Cheyenne insurance agent. "I think she should have run from Virginia," Gilbert said Tuesday outside a polling place. "I know that she's got a name and she's got some recognition, but I don't know that there's much she's done for the state of Wyoming." Gilbert said he voted instead for Darin Smith, an attorney and Christian Broadcasting Network executive from Cheyenne. Dick Cheney was elected five times to the US House seat for Wyoming that his daughter is now seeking. But his legacy cuts both ways. Many Democrats have decried Cheney's orchestration of the 2003 US invasion of Iraq, calling it a disastrous foreign policy decision. Tony Henry of Cheyenne said Tuesday he switched his party registration from Democrat to Republican specifically so he could vote against Liz Cheney. Henry said he voted for State Sen. Leland Christensen, of Alta, a former sheriff, county commissioner and US Army special operations forces soldier. "I don't like Dick Cheney, he did some terrible things, he and George Bush did, and I don't support him," Henry said. "And if Liz Cheney is anything like her father, I'm glad I voted against her." Patricia Moran of Cheyenne, however, said Tuesday that she voted for Liz Cheney. "I believe that she's probably got the background with her family to know," Moran said. "The Cheneys, they're definitely from here, they know Wyoming." Scott Hawkins of Cheyenne also said he voted for Cheney. "I don't know much about the others. I know her dad slightly, and of course from his record, so that's what I'm going by," he said.
#Democratic nomination #Republican #Ryan Greene #Wyoming's US House seat #Liz Cheney
You May Also like: