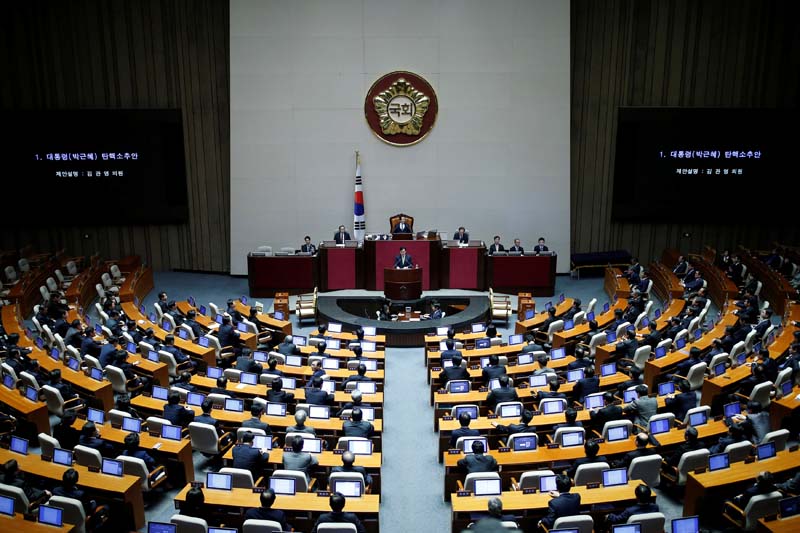 Lawmakers attend a plenary session to vote on the impeachment bill of President Park Geun-hye at the National Assembly in Seoul, South Korea, on Friday, December 9, 2016. Photo: Reuters

SEOUL: South Korean lawmakers voted overwhelmingly on Friday to impeach President Park Geun-hye over an influence-peddling scandal, setting the stage for her to become the country's first elected leader to be expelled from office in disgrace.

The impeachment motion was carried by a wider-than-expect 234-56 margin in a secret ballot in parliament, meaning more than 60 of Park's own conservative Saenuri Party members backed removing her. The votes of least 200 members of the 300-seat chamber were needed for the motion to pass. The Constitutional Court must now decide whether to uphold the motion, a process that could take up to 180 days. "I solemnly accept the voice of the parliament and the people and sincerely hope this confusion is soundly resolved," Park said at a meeting with her cabinet, adding that she would comply with the court's proceedings as well as an investigation by a special prosecutor. Park, whose approval rating stands at just 5 percent, has resisted demands that she step down immediately. Under the constitution, Park's duties were assumed by Prime Minister Hwang Kyo-ahn on an interim basis until the court rules. "I stand here with heavy-hearted sadness," Hwang said in a televised address. "As an aide to the president, I feel deep responsibility about the situation we have come to face." Cheers had erupted outside the chamber of the domed parliament building when the vote was announced. People held signs saying "Victory for the People" and "New Republic of Korea". Earlier, anti-Park activists scuffled with police as they tried to drive two tractors up to parliament's main gate. Choi Jung-hoon, a 46-year high school teacher, joined the rally outside parliament with his wife and daughters, age 7 and 18 months. "I wanted my kids to be here, making history, at a historic moment, and show we people can win," he said. Mass rallies Park (64) is accused of colluding with a friend and a former aide, both of whom have been indicted by prosecutors, to pressure big businesses to donate to two foundations set up to back her policy initiatives. Park, who is serving a single five-year term that was set to end in February 2018, has denied wrongdoing but apologised for carelessness in her ties with her friend, Choi Soon-sil. If Park leaves office early, an election must be held within 60 days. The poll frontrunners are United Nations Secretary-General Ban Ki-moon and ex-lawmaker Moon Jae-in, the former leader of the main opposition Democratic Party, who lost the 2012 election to Park by 3 percentage points. "The power of candles has made a big change without any arrest or casualty," said third-placed presidential hopeful Lee Jae-myeong, mayor of the city of Seongnam, referring to the candle-lit anti-Park rallies that have drawn huge, peaceful crowds to central Seoul for the last six Saturdays. Another rally was planned for this weekend. "It has opened up a new era in the history of the Republic of Korea's democracy," Lee - who has said he wants to be the South Korean Bernie Sanders - told Reuters. Kang Dong-wan, a professor at Dong-A University in Busan, said the large impeachment vote from Park's own party was probably a result of rising crowds at weekly demonstrations. "It looks like more from the ruling Saenuri Party gave their support than many had expected after realizing that the party could collapse if the bill doesn't get approved," Kang said. Prime Minister Hwang, whose post is largely ceremonial, assumed interim presidential powers while the court deliberates. He takes the helm at a time of heightened tension with North Korea, and said after the vote that the chances of a provocation by Pyongyang were high. Various agencies, including the Finance Ministry and financial regulators, planned emergency meetings later on Friday. South Korea's economic outlook is also worsening, in part because of the internal political uncertainty. Investors are likely to be spooked when trading resumes on Monday and remain jittery until the Constitutional Court ruling, analysts said. The won was forecast to lose further ground against the dollar on Monday. Presidential immunity- For now The daughter of a military ruler who led the country for 18 years before being assassinated by his disgruntled spy chief in 1979, Park would lose presidential immunity if she left office early, and could be prosecuted for abuse of power and bribery, among other charges. The Constitutional Court will determine whether parliament followed due process and whether there were sufficient grounds for impeachment. Arguments from the two sides will be heard in public hearings, which Park is unlikely to attend. The nine-member Constitutional Court is considered conservative in its make-up, but some of its former judges have said the case against Park is strong and was likely to be approved. In 2004, parliament impeached then-president Roh Moo-hyun, suspending his powers for 63 days while the court reviewed the decision, which it overturned. Unlike now, on that occasion public opinion was against Roh's impeachment. The prime minister at the time, Goh Kun, said in a 2013 memoir that he had decided to stay "low-key" while he held the reins of power.
#South Korea #President Park Geun-hye #Park Geun-hye #South Korea politics #Choi Soon-sil #President Park Geun-hye impeachment #South Korean lawmakers #President Park Geun-hye scandal
You May Also like: