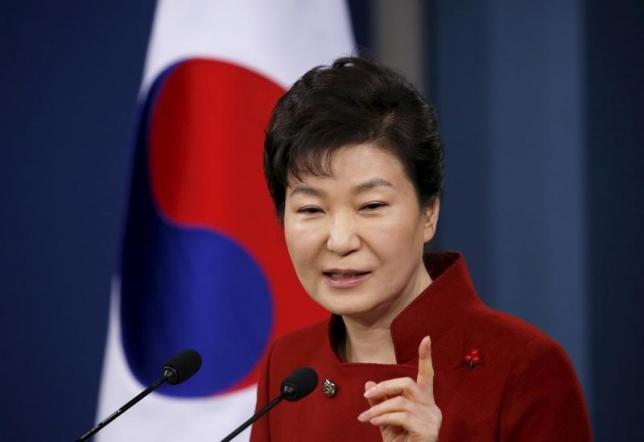 South Korean President Park Geun-hye answers questions from reporters during her New Year news conference at the Presidential Blue House in Seoul, South Korea, January 13, 2016. REUTERS
SEOUL: South Korean President Park Geun-hye pledged on Tuesday further "strong" measures against North Korea, after suspending operations at a jointly run industrial park as punishment for the North's recent long-range rocket launch and nuclear test. North Korea's recent actions, and threats to conduct more "extreme acts of provocation", demonstrate that it has no interest in peace, Park said in a speech to parliament. "The suspension of the Kaesong industrial zone is only the start of a series of actions we will be taking together with the international community," she said. "The government will take strong and effective measures for the North to come to the bone-numbing realisation that nuclear development will not help its survival but rather it will only speed up the collapse of the regime," she said. South Korea suspended the operation of the Kaesong industrial zone last week, which had been run jointly with the North for more than a decade and was a key source of hard currency for the impoverished North, as punishment for Pyongyang's rocket launch on Feb. 7. Seoul and the United States said the launch was in fact a test of a long-range missile that violated UN Security Council resolutions. The North said the launch was part of its scientific programme designed to launch satellites into space. Washington and Seoul are seeking support from Beijing, Pyongyang's main ally, for tougher sanctions against North Korea for the rocket launch and January's nuclear test. South Korea is on heightened alert for any kind of "extreme actions" Pyongyang might take, Park said, asking for bipartisan support. She also warned against using the increased tension for political purposes, "which would be exactly what the North would want to see".
#South Korea #North Korea #Park Geun-hye #Rocket launch
You May Also like: