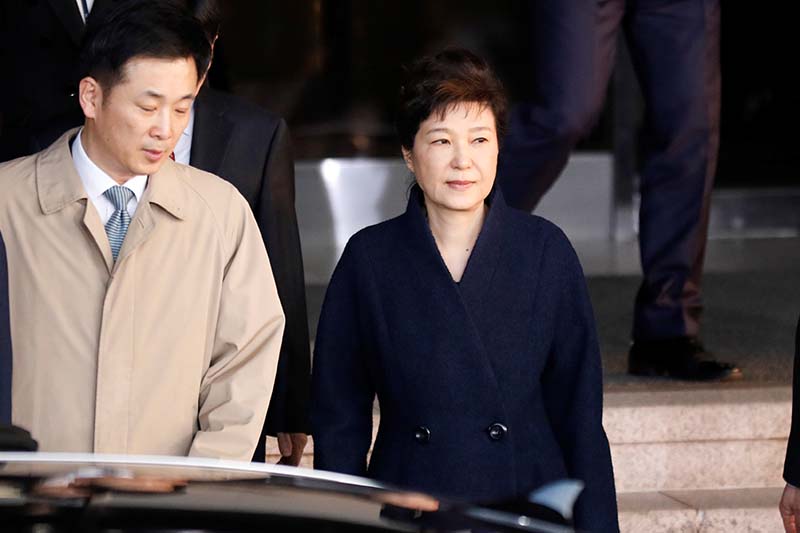 South Korea's ousted leader Park Geun-hye leaves a prosecutor's office in Seoul, South Korea, on March 22, 2017. Photo: Reuters
SEOUL, SOUTH KOREA: South Korean prosecutors said Monday that they want a court to issue a warrant to arrest former South Korea President Park Geun-hye on corruption allegations. The announcement came about one week after prosecutors grilled Park for 14 hours over suspicions that she colluded with a jailed confidante to extort from companies and committed other wrongdoing. The Seoul Central District Court had no immediate comment. The court is expected to bring in Park for questioning before it determines whether to issue the arrest warrant. The arrest is the next step before Park can be formally charged with crimes such as extortion, bribery and abuse of power. A bribery conviction alone is punishable by up to a life sentence in South Korea. While in office, Park had presidential immunity from prosecution, though her confidante Choi Soon-sil, many of her top government officials and Samsung scion Lee Jae-yong have already been arrested or indicted over the scandal. Prosecutors accuse Park of conspiring with Choi and one of a top presidential adviser to pressure 16 business groups, including Samsung, to donate 77.4 billion won ($69 million) to two nonprofits that Choi controlled and used for personal profit. The companies told investigators that they couldn't refuse because they feared business disadvantages such as state tax investigations. Prosecutors also believe the money Samsung gave Choi could qualify as bribes provided to Park. Park has denied any legal wrongdoing. She apologised for putting trust in Choi, but said she only let her edit some of her presidential speeches and provide the president with some "public relations" help. The opposition-controlled parliament in December impeached Park over the allegations and suspended her presidential powers and responsibilities before the Constitutional Court ruled on March 10 to dismiss her for the top post. Park's allegations plunged the country into political turmoil, with both Park's opponents and supporters staging massive street rallies. Three of Park's supporters, mostly elderly conservative citizens, died during clashes with the police after the March 10 court ruling.
#corruption allegations #South Korean prosecutors #Seoul Central District Court #South Korea President Park Geun-hye #bribery conviction #tax investigations Samsung group leader Jay Y Lee
You May Also like: