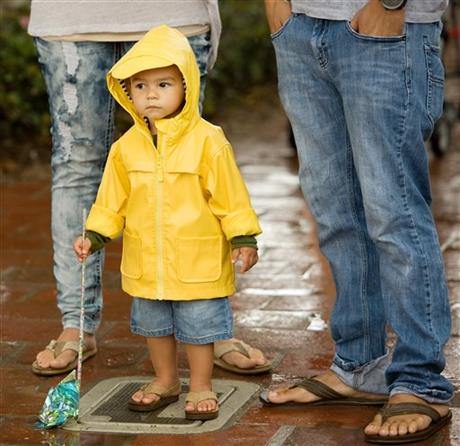 Ezekiel Ekinaka, 1, with his parents Aaron and Juliet, wears a raincoat as he experiences rain for the second time in his life, at the San Clemente, Calif. Ocean Festival before the public was urged to evacuate due to lightning on Saturday, July 18, 2015. AP
LOS ANGELES: A summer storm delivered rain, thunder and lightning to central and southern California on Saturday, leading to beach closures, flash floods and outages that left tens of thousands of people without power. The region received scattered shower — in some areas, downpours — as a tropical storm off Baja California pushes clouds and warm and muggy conditions northward. The unusual weather turned Los Angeles County's typically packed beaches into empty stretches of sand when the threat of lightning strikes forced authorities to close 70 miles of beaches. The popular Santa Monica Pier and its nearby beaches were also shuttered. Last summer, a lightning strike killed a man at Venice Beach and injured about a dozen people. An Alaska Airlines jetliner was apparently struck by lightning after leaving Los Angeles International Airport, and was forced to return shortly after takeoff. The Boeing 737, which was carrying 159 passengers to Washington, D.C., made a safe emergency landing, airline spokeswoman Bobbie Egan said. The storms dropped as little as a quarter-inch of rain in downtown Los Angeles, and as much as 2 inches of rain in the mountains of Ventura County, according to the National Weather Service in Oxnard. About an inch of rain fell in one hour in the mountain community of Frazier Park in Kern County, resulting in mud blocking a road, the weather service said. Meanwhile, outages were reported across the southern half of the state. At the peak of the outages, Pacific Gas and Electric said 73,000 customers — most of them in the Fresno area — had no power. In the Los Angeles metropolitan area, about 10,000 Los Angeles Department of Power and Water customers and an additional 16,000 Southern California Edison customers were affected by the outages. San Diego Gas & Electric reported several weather-related outages affecting hundreds of customers. The storm helped firefighters advance on two wildfires that broke out in the region on Friday. The tropical storm is expected to bring more moisture to the region through Monday.
#California #power outage #storms
You May Also like: