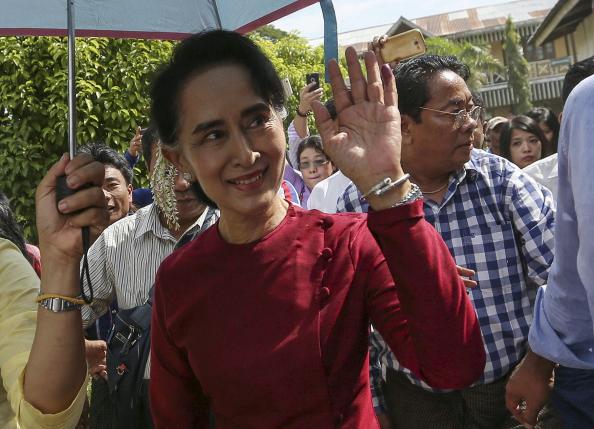 File - Myanmar pro-democracy leader Aung San Suu Kyi waves at supporters as she visits polling stations at her constituency Kawhmu township November 8, 2015. Photo: Reuters
Yangon, February 12 Myanmar’s Aung San Suu Kyi has been given extra security following a death threat on Facebook alluding to her presidential ambitions, officials said today. In a post last week, a man called Ye Lwin Myint threatened to shoot anyone who tries to change a controversial clause in the constitution which bars pro-democracy champion Suu Kyi from the top office. While he did not specifically name the 70-year-old Nobel laureate, Suu Kyi has made little secret of her desire to be president. Her National League for Democracy has taken its seats in parliament after storming last year’s election -- the freest in decades in the once junta-ruled nation. But Suu Kyi is blocked from the presidency by a charter clause because her children and spouse were foreign born. An NLD member, who did not want to be named, but who is close to Suu Kyi, confirmed that extra security measures were in place “since that man’s threat.” A senior police official in the capital Naypyidaw confirmed the security boost, also requesting anonymity. “Police security has been increased for her (Suu Kyi)... but it is unofficial.” The threat comes at a key time in Myanmar’s drawn out power transition. After her party’s November election win, Suu Kyi vowed to appoint a proxy and rule “above” a president who is set to be chosen in March. But in recent days rumours have swirled of backroom talks towards suspending the controversial 59 (f) clause so she can take the top job. It is a highly contentious issue, with some senior members of the still powerful army vigorously opposed to charter change. Speculation that big political plays are under way in Myanmar was deepened today as it emerged that President Thein Sein will not travel to America next week to join Southeast Asian leaders in talks with President Barack Obama. As well as blocking Suu Kyi’s rise, the charter also gifts the military 25 per cent of parliamentary seats and an effective veto on constitutional amendments. Suu Kyi, for years the army’s nemesis as the figurehead of the country’s democracy struggle, is already protected by a personal security detail. Her father, independence hero general Aung San, was assassinated in 1947.
#pro-democracy champion
You May Also like: