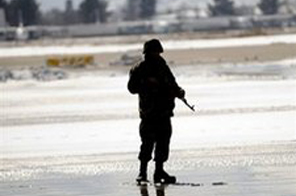 An Afghan army soldier stands guard near a military airport in Kabul. A suicide attacker has targeted Kabul's military airport, an officer with the International Security Assistance Force has said. Source: AFP

KABUL: A Taliban spokesman has claimed responsibility for a car bomb attack near the military airport in Kabul. An Afghan official says one civilian has been killed and seven wounded.
Police say the vehicle exploded near the entrance to the airport in the Afghan capital early Tuesday. The blast rattled windows more than a mile (1.6 kilometers) away.
Taliban spokesman Zabiullah Mujahid says the attack was against a NATO convoy and that three Landcruisers were destroyed. NATO forces say they do not yet have details on the incident. An Afghan health ministry official says one civilian was killed and seven wounded.